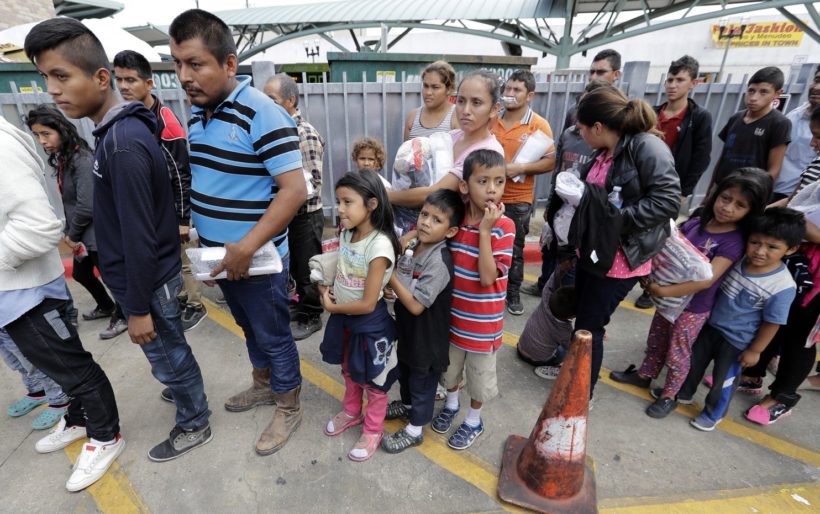 On line to enter a bus station after being processed and released by U.S. Customs and Border Protection on June 24, 2018.

(by Priscilla Alvarez and Geneva Sands, CNN) – The Department of Homeland Security will start a DNA testing pilot program next week to help identify and prosecute individuals posing as families in an effort to target human smuggling, two department officials confirmed to CNN.

The Rapid DNA testing, as it’s known, involves a cheek swab and can, on average, provide results in about 90 minutes, a senior Immigration and Customs Enforcement official said.  The pilot program will run for two to three days in two border locations, the official added. …

DHS has repeatedly warned that children are being exploited by traffickers to skirt the nation’s immigration laws. Currently, the government can’t hold migrant children in detention for more than 20 days, often leading to the release of families — or groups posing as families — until their immigration court hearing, a practice [known] as “catch and release.”

[Acting DHS Secretary Kevin McAleenan said, “It’s very clear that the cartels and smugglers know the weaknesses in our laws. They know that family units and unaccompanied children will be released with no consequences for their illegal entry.”].

The information collected in the DNA test will not be stored or shared, an ICE official said. …

According to DHS, there was a 315% increase “in the number of cases of adults with minors fraudulently posing as ‘family units’ to gain entry” from October 2017 to February 2018.

In the last year, immigration officials said they’ve identified about 3,100 people who lied about being part of a family or claimed someone who was over 18 years old was a child.

“Cases of ‘fake families’ are popping up everywhere. And children are being used as pawns,” former Homeland Secretary Secretary Kirstjen Nielsen in a speech last month. She also said DHS had uncovered “child recycling rings,” a process of using children repeatedly in an attempt to be released in the US.

Both ICE and Customs and Border Protection — two agencies within DHS that handle the processing of migrants — will be involved in the pilot. CBP will make a referral for investigation and ICE Homeland Security Investigations will take it from there, the senior official said.

National Border Patrol Council President Brandon Judd said he supports the use of DNA testing as a means of preventing child abuse.

“Rapid DNA is really the only way that we are going to positively be able to identify these children. Even if the cost is great, in order to protect these children, I think the cost is well worth it,” he said.

…In March, there were more than 92,000 arrests of undocumented migrants for illegal entry on the southern border, up from 37,390 in March 2018 — the majority of whom were families, according to data from CBP.

From CNN .com. (Updated 10:00 PM ET, Tue April 30, 2019) Reprinted here for educational purposes only. May not be reproduced on other websites without permission from CNN.

2. What problem is DHS addressing? Be specific.

3. What is the purpose of the Rapid DNA testing pilot program?

5. DHS cannot estimate the number of people fraudulently posing as family units who avoided detection. How many did agents identify?

6. CNN exclusively reported last week that US Border Patrol began fingerprinting some migrant children 14 and younger because of increased concern about fraud and the trafficking of children. Prior to the new guidance, Border Patrol occasionally took photos of children, and collected additional information, but did not fingerprint migrants under 14, according to a senior Border Patrol official. How important do you think it is to protect children from being exploited by human smugglers and cartels by identifying them? Explain your answer.

From the CNN article above:
On Monday, ICE announced that it’s shifting additional resources and personnel to the southern border, this time from its Homeland Security Investigations office to investigate human smuggling and the use of fraudulent documents “to create fake families.”

…In April, DHS sent teams with experience in detecting smuggling and trafficking — including document analysts and victim assistance specialists — to Texas, New Mexico, Arizona and California.

Watch a May 1 news report: