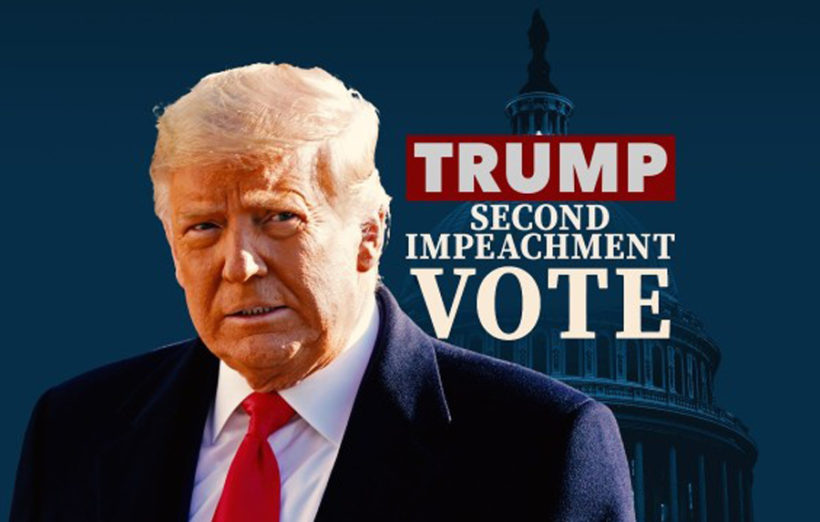 (by Ivan Pentchoukov, The Epoch Times) – Democrats in the House of Representatives, joined by ten Republicans, voted to impeach President Donald Trump for a second time in a 232-197 vote on Wednesday. The single article of impeachment alleges that the president incited an insurrection that resulted in the breach of the U.S. Capitol on Jan. 6.

The impeachment, accomplished in a single seven-hour session, was the fastest in U.S. history. It is also the first time in the nation’s history that a president was impeached twice.

Republicans criticized the rush, arguing that it offered no due process to the president and no confidence in the proceedings to the American people. Democrats justified the truncated (shortened; cut short) process by alleging that Trump poses a danger to the nation every day he is in office.

“We know that the president of the United States incited this insurrection, this armed rebellion, against our common country,” House Speaker Nancy Pelosi (D-Calif.) alleged. “He must go. He is a clear and present danger to the nation that we all love.”

Every Democrat voted in favor of impeachment.

Some Republicans argued that moving forward with impeachment would further divide the nation.

“Instead of moving forward as a unifying force, the majority in the House is choosing to divide us further,” Rep. Tom Cole (R-Okla.) said. “I can think of no action the House could take that’s more likely to further divide the American people than the action we are contemplating today.”

Some of the Republicans who opposed impeachment did not explicitly defend the president. Others opposed the charge and argued that the president’s [speech] did not amount to incitement.

“At his rally, President Trump urged attendees to ‘peacefully and patriotically make your voices heard.’ There was no mention of violence, let alone calls to action,” said Rep. Guy Reschenthaler (R-Pa.), a former Navy prosecutor. “President Donald Trump’s words would not even meet the definition of incitement under criminal statutes.”

… The mob [of hundreds] had already breached Congress when Trump was giving a speech to a large crowd of supporters [estimated at 150,000] more than a 30-minute walk away, a timeline by The Epoch Times shows. After news of the breach of the Capitol was reported, the president issued a video message calling on the crowd to support the police and to go home. The day after, he said there will be “an orderly transition on Jan. 20.” The president later said he will not attend the inauguration.

Congressman Cole pointed out that every impeachment in modern history was preceded by a committee investigation which included testimony from witnesses and experts. He argued that a truncated process affords no due process to the president and does little to offer confidence in the process to the American people. Reschenthaler cautioned that charging Trump would “lower an already low bar for impeachment.”

Republicans proposed forming a bipartisan commission to investigate the breach as an alternative to impeachment. A pair of Republicans who spoke in favor of the commission characterized the Capitol breach as a domestic terror attack. Rep. Rodney Davis (R-Ill.) cautioned that foreign adversaries witnessed how easy it is to take out a branch of the U.S. government. The commission, if formed, would prepare a report for the president advising how to prevent a future breach, Davis said.

Rep. Nancy Mace (R-S.C.) noted that rioting was not isolated to the breach of the Capitol on Jan. 6, but has gone on for months, with politicians on both sides to blame. Mace appeared to refer to the nationwide riots fomented and executed by the Antifa extremist group and the Black Lives Matter (BLM) movement. The riots, arson, and looting caused up to $2 billion in damage across the nation and resulted in the deaths of two dozen people.  Rep. Tom McClintock (R-Calif.) suggested that if Antifa and BLM rioters were diligently prosecuted, the events at the Capitol might not have occurred at all. …..

Democrats, including Pelosi, selectively quoted from Trump’s speech on Jan. 6 in which the president said that “we fight like hell” in regards to his team’s legal battle to challenge the legitimacy of the election in several states.

“I think one of our great achievements will be election security because nobody until I came along, had any idea how corrupt our elections were,” the president said, before noting that others would not have taken a stand. “We fight like hell and if you don’t fight like hell, you’re not going to have a country anymore.”

The impeachment follows an unprecedented wave of censorship against the president by U.S. social media giants. Facebook, Twitter, and Google had all banned Trump from their platforms as of Jan. 13.

“It’s not about impeachment anymore. It’s about canceling the president and anyone that disagrees with them,” Rep. Jim Jordan (R-Ohio) said.

NOTE: Before answering the following questions, read the info under “Background” and check out the “Resources” below.

2. For what reason have the Democrats in the U.S. House (joined by 10 Republicans) voted to impeach President Trump?

3. What consequences does an elected official who is impeached face?

5. Re-read paragraph 11. What is your reaction to this information?

6. a) Define impeach, incite, insurrection, due process and “clear and present danger” as used in the article.
b) President Trump’s speech at the Jan. 6 rally in Washington DC was almost an hour and 15 minutes long.
Watch two clips from Trump’s entire speech for the president’s remarks about going to the Capitol:

Do you think President Trump was attempting to “incite an insurrection?”  Explain your answer.

7. Re-read paragraph 12. What do you think of Congressmen Cole and Reschenthaler’s arguments?

8. a) What did Representatives Nancy Mace (R-S.C.) and Tom McClintock (R-Calif.) say about the rioting? Be specific.
b) What do you think of these assertions?

CHALLENGE: Watch President Trump’s Trump’s entire speech at the Jan. 6 rally in Washington DC. See the 17 minutes in (from 17:30 to 18:30) and see the end of the speech from 1:12:24 to 1:13:20 for remarks about going to the Capitol.  Do you think President Trump “incited a riot”?  Do you think President Trump told supporters to “storm” the Capitol? Explain your answer. Some of the videos from the Capitol on Jan. 6 show police moving a barricade aside and allowing hundreds of people into the Capitol grounds, as well as opening the doors and allowing people to enter. One video showed people with American and Trump flags walking through the Capitol rotunda taking pictures and staying within the ropes (which are most likely in place for tours).  Trump supporters support the rule of law, law and order, and the police. What is your reaction to the fact that some people were violent and/or destructive in the Capitol? Ask a parent the same questions and discuss your answers.

The U.S. Constitution gives the House of Representatives the sole power to impeach an official, and it makes the Senate the sole court for impeachment trials. The power of impeachment is limited to removal from office but also provides a means by which a removed officer may be disqualified from holding future office. Fines and potential jail time for crimes committed while in office are left to civil courts.

Article II, Section 4 of the Constitution states:  “The President, Vice President and all Civil Officers of the United States, shall be removed from Office on Impeachment for, and Conviction of, Treason, Bribery, or other high Crimes and Misdemeanors.”

Read about impeachment at house.gov and at Wikipedia.

The United States Constitution provides that the House of Representatives “shall have the sole Power of Impeachment” ( Article I, section 2 ) and that “the Senate shall have the sole Power to try all Impeachments…[but] no person shall be convicted without the Concurrence of two-thirds of the Members present” ( Article I, section 3 ). The president, vice president, and all civil officers of the United States are subject to impeachment. (Read more at senate.gov)

More from the article above:

The breach of the Capitol took place while the two chambers debated whether an objection to the counting of presidential electors from Arizona should be affirmed. After the building was secured, both chambers voted to overrule the objection. More than one hundred Republicans voted to uphold the objection.

“Americans are tired of the double standard. They are so tired of it. Democrats objected to more states in 2017 than Republicans did last week but somehow we’re wrong,” said Rep. Jim Jordan (R-Ohio).

Read the text of the Democrats’ Article of Impeachment here.