City makes it illegal to sit or lie on sidewalks 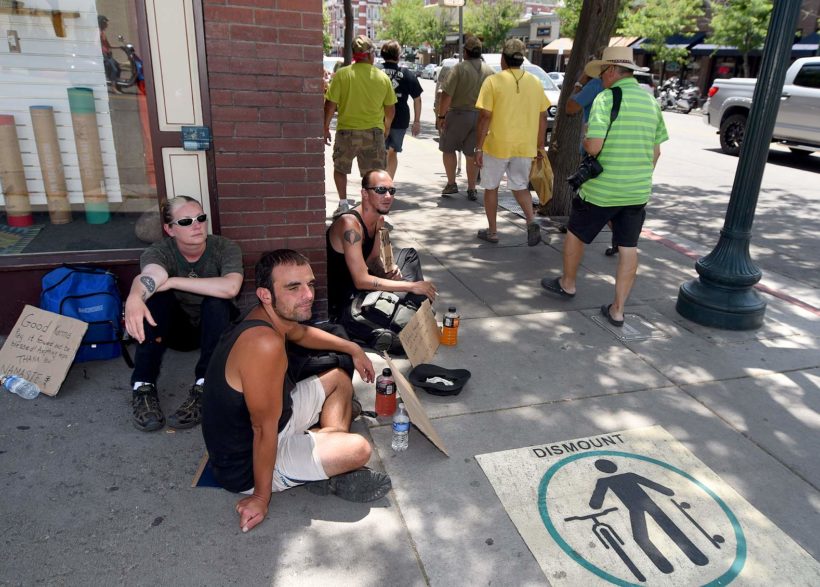 Many of the homeless and/or panhandlers in Durango are young people. Businesses have had a problem with panhandlers and loiterers since at least 2015.

(Compiled from Fox5NY and Durango Herald by Mary Shinn) – With a 5-0 vote, a Colorado city has approved an ordinance that will make sitting or lying down on downtown sidewalks, curbs, or other public areas illegal. The measure passed at the May 15, 2018, Durango City Council meeting.

Council member Dick White said the ordinance is meant to improve the safety and atmosphere in the city’s downtown. The rule bans sitting or lying down on sidewalks, curbs, streets, railways, alleys, parking spaces, or other publicly owned property for pedestrian or vehicle travel in the downtown area from 7 a.m. to 2:30 a.m.

Councilors defended the ordinance and said that it would not discriminate against panhandlers or anyone else. “People can stand with a sign on Main Avenue all day long and they are absolutely within their First Amendment rights,” White said.

The City Council acted after hearing numerous complaints from business owners and visitors about people lying in the middle of the sidewalks in the downtown business district. One council member wondered why the ban wasn’t in effect 24 hours a day.

The rule was billed as a safety measure because of the hazards of navigating around people blocking sidewalks and areas where cars drive. The ordinance noted that tourists are often not familiar with the area, leading to increased concerns about safety.

Exemptions include people experiencing medical emergencies, people with disabilities, children in strollers, or those attending parades, festivals, performances, or other special events. Violators can be fined up to $200.

The ordinance also allows people to “rest” on benches. (Residents are allowed to sit on furniture installed by the city or a business.) In May 2015 homeless loiter on benches and the sidewalk in front of the Irish Embassy Pub on Main Avenue in Durango. Benches along Main Avenue were moved around in the spring of 2015 at the request of local merchants. (Photo by Mary Shinn, Durango Herald)

The crowd was split on the issue. Some residents praised the council for backing the ordinance, and others were concerned the rule was targeting panhandlers and homeless residents. Business owners spoke in favor of the ordinance before the vote was taken.

Durango is a small city in southwestern Colorado, near the New Mexico border with a population of about 18,500 people.

The ordinance was based on similar laws that have held up to legal challenges, including ordinances in Colorado Springs and Tempe, Arizona, Dirk Nelson said.

“I wouldn’t have brought an ordinance to you that I didn’t think was legally supportable,” he said in response to questions from councilors.

Compiled from Fox 5NY and the Durango Herald. The Associated Press contributed to the Fox5NY report.

2. Why did the Durango, Colorado City Council pass the May 15 ordinance?

3. What is the purpose of the ordinance passed unanimously at the May 15 Durango City Council meeting?

5. a) Define exemption.
b) Who/when are people exempt from the ordinance?

Do you think people should be permitted to sit and/or lie on the sidewalk all day? (If you think they should be allowed to do so, would it make a difference if there were just a few as opposed to tens or hundreds?) Do you think towns/cities should be able to have laws prohibiting vagrancy or loitering? Explain your answer.

7. The US Supreme Court has ruled that begging is a protected form of speech and cities cannot ban panhandling outright. What do you think? Ask a parent the same question.