CIA chief warns Islamic State may have other attacks ready 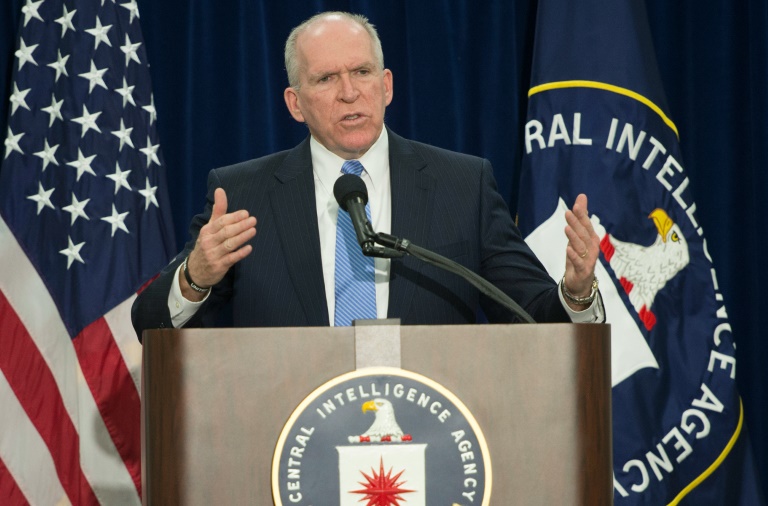 (by Jonathan S. Landay, Mark Hosenball and John Irish, Reuters) — CIA Director John Brennan warned on Monday that the attacks in Paris claimed by the extremist Islamic State movement were not a “one-off event” and that the militants may have similar operations ready to launch.

Foiling those plots, however, could prove difficult because Europe’s intelligence and security resources are severely stretched trying to keep track of the hundreds of European extremists who have returned home from fighting in Syria and Iraq.

“A lot of our partners right now in Europe are facing a lot of challenges in terms of the numbers of individuals who have traveled to Syria and Iraq and back again, and so their ability to monitor and survey these individuals is under strain,” Brennan said.

Brennan’s comment at a Washington policy institute came as France, Belgium and other countries intensified a manhunt for suspects in Friday’s attacks on a concert hall, sports stadium, restaurants and bars in Paris that killed 129 people.

U.S. intelligence still hasn’t confirmed that the Islamic State was responsible, said Brennan. But, he added, the Paris attacks and the suspected bombing of a Russian airliner in Egypt on Oct. 31 that killed all 224 passengers and crew aboard “bear the hallmarks” of the Islamist group.

The Islamic State, which threatened in a new video on Monday to attack in Washington, appears to have formed an external operations branch that may have readied follow-up strikes to the Paris attacks, he said.

“I would anticipate that this is not the only operation that ISIL has in the pipeline,” Brennan said, using an acronym for the Islamic State. “And security intelligence services right now in Europe and other places are working feverishly to see what else they can do in terms of uncovering it.”

Careful planning for the Paris strikes is believed to have taken place over several months “in terms of making sure they had the operatives, the weapons, the explosives, the suicide belts,” Brennan said.

The attacks did not surprise the U.S. intelligence community, which had “strategic warning” that ISIL was planning to strike somewhere outside of the Middle East and was “looking at Europe in particular,” Brennan said.

“I certainly wouldn’t consider it (the Paris attacks) a one-off event,” he said.

One major problem is the huge burden that tracking extremists who’ve returned from Syria has imposed on resource-short European intelligence agencies, he said.

European officials estimate that as many as 5,000 European Muslims have gone to fight in Syria since 2011. That number includes an estimated 1,400 Islamic French nationals, of whom some 900 have returned to France.

Moreover, between 10,000 and 20,000 individuals have been flagged by French authorities as potential security threats under a procedure known as an “S Notice,” said Roland Jacquard, a French counter-terrorism expert.

“We’re in a situation where the services are overrun. They expect something to happen, but don’t know where and you have to see how much stress they are under,” said Nathalie Goulet, the head of a French Senate investigation into jihadi networks.

Belgium, where investigators believe the Paris attacks were plotted, has been striving to keep track of more than 70 returnees from Syria. Officials estimate that 350 Belgium nationals have gone there to fight.

U.S. and European officials say that as many as two dozen to three dozen officers must work around the clock to keep a single suspect under full-time surveillance.

At least two men identified by French investigators as having carried out the Paris attacks were known to European and U.S. intelligence agencies before the carnage.

A Belgian Muslim man suspected of masterminding the attacks, Abdelhamid Abaaoud, was identified in the New York Times in January as a prime suspect in a foiled plot to strike targets in Brussels. He also was known to U.S. spy agencies, said a U.S. government source.

Another problem confronting intelligence services is that [Islamic] militant groups have intensified their security measures as a result of “unauthorized disclosures,” said Brennan.

While he did not elaborate, Brennan may have been referring to former National Security Agency contractor Edward Snowden’s revelations of the agency’s massive communications monitoring operations and leaks of classified documents by Wikileaks.

2. For what reasons does CIA Director John Brennan believe it will be very difficult for intelligence in European countries to prevent more terrorist plots from succeeding? Be specific.

3. What other large-scale recent attack is ISIS believed to be responsible for?

4. a) What threat did ISIS make against the U.S. this week?
b) How seriously do you think President Obama and Homeland Security should take this threat? What response should they have? (Continue with the bombing of ISIS targets in Syria, continue implementing defensive measures in the U.S., go on a full scale offense coordinated with France, Russia, Great Britain, et al…?) Explain your answer.

5. Why wasn’t the U.S. intelligence community surprised by the Islamic State attacks in Paris that killed 129 people?

6. a) How many European Muslims have gone to fight in Syria since 2011?
b) How many of the 1,400 French nationals have returned to France?

7. One reader commenting on the problem of security services being overrun by the large numbers of Islamists returning from fighting in Syria wrote:
“They’re having a hard time keeping track of all of these returning jihadists? Any Muslim who goes to Syria to fight should lose his citizenship/residency and be banned permanently from ever returning to his country (France, Belgium, etc.). Any Muslim who goes to the Middle East to fight alongside the Islamic State or any terrorist group should have his or her citizenship taken away and never be allowed to return to Europe and/or America.”
What do you think of this suggestion? Explain your answer.

On Monday, three days after teams of Islamic State terrorists brazenly carried out raids across Paris that left 129 people dead, when responding to questions about his policies, President Obama said, “There will be setbacks and there will be successes. The terrible events in Paris were obviously a terrible and sickening setback.”

The president faces tough criticism from Capitol Hill — for saying the morning before the attack that ISIS had been “contained” in Iraq and Syria, and for sustaining a military strategy that critics deem insufficient.

But Obama on Monday stuck by the U.S. strategy for fighting the terror group while defending his earlier remarks.

The president said the ultimate goal is to “degrade and ultimately destroy this barbaric terrorist organization.” But he insisted that the reason he said they’re contained, hours before terror teams launched deadly raids across Paris, is because “they control less territory than they did last year.”