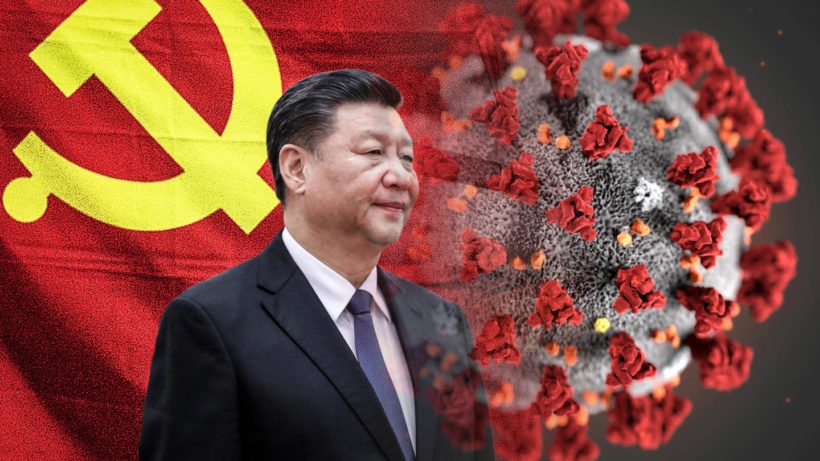 (by Nick Wadhams and Jennifer Jacobs, Bloomberg News) — China has concealed the extent of the coronavirus outbreak in its country, under-reporting both total cases and deaths it’s suffered from the disease, the U.S. intelligence community concluded in a classified report to the White House, according to three U.S. officials.

The [unnamed] officials…said that China’s public reporting on cases and deaths is intentionally incomplete. Two of the officials said the report concludes that China’s numbers are fake.

The outbreak began in China’s Hubei province in late 2019, but the Communist government has publicly reported only about 82,000 cases and 3,300 deaths, according to data compiled by Johns Hopkins University. That compares to more than 189,000 cases and more than 4,000 deaths in the U.S. [as well as Italy and Spain’s significantly larger numbers than what has been claimed by Chinese officials] …..

Communications staff at the White House and the Chinese embassy in Washington didn’t immediately respond to requests for comment.

“The reality is that we could have been better off if China had been more forthcoming,” Vice President Mike Pence said Wednesday on CNN. “What appears evident now is that long before the world learned in December that China was dealing with this, and maybe as much as a month earlier than that, that the outbreak was real in China.

While China eventually imposed a strict lockdown beyond those of less autocratic nations, there has been considerable skepticism toward China’s reported numbers, both outside and within the country. The Chinese government has repeatedly revised its methodology for counting cases, for weeks excluding people without symptoms entirely, and only on Tuesday added more than 1,500 asymptomatic cases to its total.

Stacks of thousands of urns outside funeral homes in Hubei province have driven public doubt in Beijing’s reporting. … Senator Ben Sasse, a Nebraska Republican, said in a statement after Bloomberg News published its report.

“Without commenting on any classified information, this much is painfully obvious: The Chinese Communist Party has lied, is lying, and will continue to lie about coronavirus to protect the regime.”

Dr. Deborah Birx, the State Department immunologist on the White House Coronavirus Task Force, said Tuesday that China’s public reporting influenced assumptions elsewhere in the world about the nature of the virus.

“The medical community made — interpreted the Chinese data as: This was serious, but smaller than anyone expected,” she said at a news conference on Tuesday. “Because I think probably we were missing a significant amount of the data, now that what we see happened to Italy and see what happened to Spain.”

[Dr. Birx also noted that China’s distortion of the truth damaged the world’s ability to fight the virus. She said reporting significantly smaller numbers led medical experts to believe they were only dealing with a SARS-like virus.].

China isn’t the only country with suspect public reporting. Western officials have pointed to Iran, Russia, Indonesia and especially North Korea, which has not reported a single case of the disease, as probable under-counts. Others including Saudi Arabia and Egypt may also be playing down their numbers.

U.S. Secretary of State Michael Pompeo has publicly urged China and other nations to be transparent about their outbreaks. He has repeatedly accused China of covering up the extent of the problem and being slow to share information, especially in the weeks after the virus first emerged, and blocking offers of help from American experts.

“This data set matters,” he said at a news conference in Washington on Tuesday. The development of medical therapies and public-health measures to combat the virus “so that we can save lives depends on the ability to have confidence and information about what has actually transpired,” he said.

Published at bloomberg .com on April 1, 2020. Reprinted here for educational purposes only. May not be reproduced on other websites without permission from the Bloomberg.

Since the beginning of the pandemic, China has been accused of multiple coverups. It has shifted its timeline on what it knew and when it knew it and has gone after critics, doctors and whistleblowers trying to sound the alarm.

In recent weeks, China has launched a coordinated campaign to boost its global image. It has rebranded itself, tried to restart its economy and sold supplies to hard-hit countries struggling to contain the virus within their borders.

“The only thing better than playing themselves as a victim is showing that they can emerge as a resilient hero,” Greg Barbaccia, an expert in counterintelligence, insider threat and corporate espionage, told Fox News.

Barbaccia, who spent five years on active duty as an intelligence sergeant in the U.S. Army, said China is taking advantage of the current economic landscape and using it to their advantage as other countries like Italy and Iran struggle

Not only has China clogged up its own airwaves with propaganda touting the country’s success in taming COVID-19, it has also pledged millions of dollars to the United Nations’ World Health Organization (WHO) and in return has received public accolades.

A U.N. report released Wednesday praised China for sharing the genetic sequence of COVID-19. What it didn’t highlight was that Chinese officials didn’t report the first case of coronavirus until forced to and that documents later revealed that China knew about the dangers of the virus two months before reporting it. Had China been forthright, COVID-19 could have been contained.

On Wednesday, there were more than 847,081 confirmed cases of coronavirus around the world. The U.S. surpassed 200,000 cases Wednesday. Globally, the number of those infecting will likely hit the million mark by Friday. In the United States there have been 4,417 deaths. The body count globally stands at 45,497. (from an April 1 report at Fox News)

1. What have U.S. intelligence officials concluded about the Communist government of China’s reporting on the coronavirus, which originated in China’s Wuhan province?

2. What did two of the officials say about China’s coronavirus numbers?

3. What did Vice President Mike Pence, who is leading the White House Coronavirus Task Force, say about China’s reporting on the virus?

4. Why have people around the world mistrusted the Chinese government’s reporting on the virus? (What is known about what they have done, as well as the reality in Hubei province?)

5. What did Dr. Deborah Birx say about the Communist government’s distortion of the true scope of the coronavirus?

6. List additional countries mentioned in the article that are suspected of lying about their numbers.

7. How do you think things might have been different had the Chinese government been honest with world leaders about the scope and dangers of the coronavirus? (Do you think medical and disease experts would have taken a much more aggressive approach to dealing with it earlier?) Explain your answer.

8. a) Read the editorial under “Background” (below the questions) about the WHO’s relationship with China. The World Health Organization is a specialized agency of the United Nations responsible for international public health. Considering the facts learned in this commentary, do you agree with the writers who say, “We believe the [WHO’s] director-general, Tedros Adhanom Ghebreyesus, like China’s Xi Jinping, should be held accountable for recklessly managing this deadly pandemic”? Explain your answer.

OPINION from thehill .com:  “China and the WHO’s chief: Hold them both accountable for pandemic”

(by Bradley A. Thayer and Lianchao Han) — The World Health Organization (WHO) last week finally declared the coronavirus from China that rapidly spread across the world a pandemic. Now, with more than 150,000 confirmed cases globally and more than 5,700 deaths, the question is why it took so long for the WHO to perceive what many health officials and governments had identified far earlier.

We believe the organization’s director-general, Tedros Adhanom Ghebreyesus, like China’s Xi Jinping, should be held accountable for recklessly managing this deadly pandemic. Tedros apparently turned a blind eye to what happened in Wuhan and the rest of China and, after meeting with Xi in January, has helped China to play down the severity, prevalence and scope of the COVID-19 outbreak.

From the outset, Tedros has defended China despite its gross mismanagement of the highly contagious disease. As the number of cases and the death toll soared, the WHO took months to declare the COVID-19 outbreak as a pandemic, even though it had met the criteria of transmission between people, high fatality rates and worldwide spread.

When President Trump took a critical step to stop the coronavirus at U.S. borders by issuing a travel ban as early as Jan. 31, Tedros said widespread travel bans and restrictions were not needed to stop the outbreak and could “have the effect of increasing fear and stigma, with little public health benefit.” He warned that interfering with transportation and trade could harm efforts to address the crisis, and advised other countries not to follow the U.S. lead.

When he should have been focusing on global counter-pandemic efforts, Tedros instead was politicizing the crisis and helping Xi to shirk his responsibility for a series of wrongdoings in addressing the outbreak. Tedros used the WHO platform to defend the Chinese government’s gross violation of human rights. For example, from its first case discovered in November to its Wuhan lockdown, and even until today, China has been dishonest about the coronavirus’s origin and prevalence. People who tried to uncover it were detained or disappeared, their online reports and posts deleted. China has misinformed and misled the world, and Tedros joined this effort by publicly praising China’s “transparency” in battling the spread of the disease.

When Xi ordered Chinese health officials to speed up the development of drugs by using “integrated Chinese traditional herbal medicine and Western medicine,” the WHO’s official publication, “Q&A on coronaviruses (COVID-19),” made a subtle change. Chinese netizens found a discrepancy between the Chinese and English versions of a list of measures deemed ineffective against COVID-19. The English version listed four items — smoking, wearing multiple masks, taking antibiotics, and traditional herbal remedies. The fourth item was not included in the Chinese version. (Today the English version also has deleted that item.)

China recently pledged $20 million to help the WHO fight the COVID-19 outbreak, for which Tedros thanked Xi. But we note China’s connections to Tedros’s homeland of Ethiopia, now called East Africa’s “Little China” because it has become China’s bridgehead to influence Africa and a key to China’s Belt and Road initiative there. Indeed, China has invested heavily in Ethiopia.

Tedros was elected to his position with the WHO in 2017, despite the fact that he was not trained as a medical doctor and had no global health management experience. A former minister of health and minister of foreign affairs for Ethiopia, Tedros is an executive member of the Tigray People’s Liberation Front (TPLF) political party, which came to power through a struggle in 1991 and has been listed as a perpetrator in the Global Terrorism Database. After he became the WHO’s chief, critics questioned Tedros’s attempt to appoint then-Zimbabwe dictator Robert Mugabe as a WHO goodwill ambassador.

The coronavirus pandemic has shown that Tedros is not fit to lead the WHO. Because of his leadership, the world may have missed a critical window to halt the pandemic or mitigate its virulence. The world is now battling rising infections and many countries have imposed restrictions. As leader of the WHO, Tedros should be held accountable for his role in mismanaging efforts to control the spread of the virus.

Bradley A. Thayer is professor of political science at the University of Texas-San Antonio and the co-author of “How China Sees the World: Han-Centrism and the Balance of Power in International Politics.”

Lianchao Han is vice president of Citizen Power Initiatives for China. After the Tiananmen Square Massacre in 1989, he was one of the founders of the Independent Federation of Chinese Students and Scholars. He worked in the U.S. Senate for 12 years, as legislative counsel and policy director for three senators.