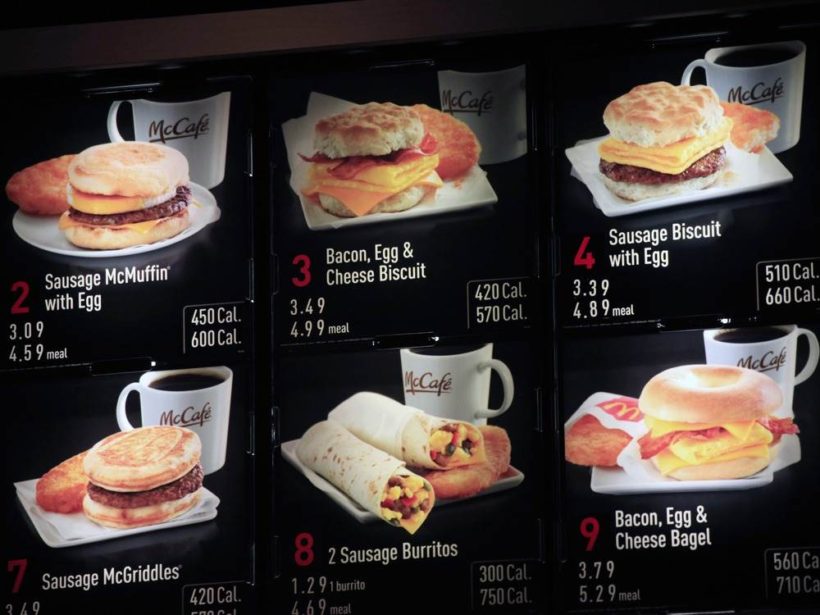 (by Dan Goldberg, Politico New York) – Seven years after then-mayor Michael Bloomberg pushed for calorie counts on menus across the city, new research shows they aren’t having much of an effect.

The latest study confirms what many others – including New York City’s health commissioner Mary Bassett – had already found: Calorie labeling has no short-term impacts on how many calories consumers buy.

“Menu labeling, in particular at fast-food restaurants, will not on its own lead to any lasting reductions in calories consumed,” said Brian Elbel, the study’s author and an associate professor…at NYU….

The study doesn’t tackle why this is, but one concern has long been that the calorie counts don’t provide enough context, and that the average fast-food buyer may not know how many calories are appropriate for a given meal.

Elbel, whose findings were published Monday (Nov. 2) in Health Affairs, examined nearly 7,700 fast-food diners in New York City and nearby Jersey cities. He looked at McDonald’s, Burger King, KFC and Wendy’s and found people were eating more calories than they had back in 2008, when the labeling rule went into effect, though the increase was not statistically significant.

“We found no consistent change in the nutritional content of foods and beverages purchased or in how often respondents purchased fast food,” the study said.

…It’s clear the calorie counts did not have the rule’s desired effect of reducing [customers’] caloric intake in the city’s fast-food restaurants.

The city’s health department, which has never wavered in its support for menu labeling, pointed out that the study also confirmed that the calorie counts do at least make people aware of what they are eating, and that 9 percent of people used the menus to order fewer calories.

“The study confirms that people who eat in fast food restaurants with calorie labeling are more likely to be aware of caloric intake and order food with fewer calories than people who eat in restaurants without calorie counts,” a health department official said in a statement. “Educating consumers works, and remains an important way to help people live healthier lives.”

But it works only to a point, and the effects appear to fade over time. As the calorie counts become increasingly ubiquitous [seen everywhere], they tend to fade into the background.

These findings should not surprise Bassett [NYC’s health commissioner], who in 2011, while she was in the private sector*, co-authored a study published in BMJ (formerly the British Medical Journal) that found “no overall decline in calories purchased.”  (*private sector are privately owned businesses compared to the public sector, which are government jobs)

That study also found that one in six customers reported using the calorie information, and those people ate fewer calories.

It was one of several studies published in recent years that found menu boards affected neither purchases nor consumption.

Elbel’s study comes as the city is set to require chain restaurants to post warning signs next to menu items that have more than 2,300 milligrams of sodium, the recommended daily limit.

But that policy may prove more effective. Studies have shown that images make more of an impact than numbers, in part because pictures require less context.

“There are lots of reasons to believe it could be more effective than calorie counts,” he said. “You don’t have to understand how many milligrams of sodium you should have. You don’t need literacy. You don’t need numeracy. You just need to avoid that symbol.”…

Reprinted here for educational purposes only. May not be reproduced on other websites without permission from Politico. For the original article, visit PoliticoNewYork.

1. a) How long ago did then-New York City mayor Michael Bloomberg require calorie counts on menus across NYC?
b) For what reason did city officials pass this requirement for restaurants?

2. What did the latest study conclude about the effectiveness of the government requiring fast food restaurants to post calories on the menu?

3. a) The study did not examine why the regulations were not effective. What does the reporter suggest could be the reason?
b) What do you think: do you or disagree with this assertion?

4. What exactly did Mr. Elbel find when examining fast food restaurants in NYC and NJ?

5. What response did the NYC health department give when asked about the results of the study?

6. What have other studies (including Health Commissioner Bassett’s when she worked in the private sector) found about consumers’ use of calorie information?

7. a) What new warning is New York now requiring restaurants to add to their menus?
b) Why do officials think this warning will be more effective than calorie information?

8. It was costly for restaurants to redo menus to add calorie information. Most likely the cost was passed on to customers in some way, such as higher prices, smaller portions or lower quality food offered. Do the benefits to consumers who chose to use the calorie info outweigh the cost to all consumers? Explain your answer.

9. People know fast food is not healthy yet they still eat it. The government is trying, by enacting regulations on private businesses, to force people to make healthy choices. Should officials consider closing fast food restaurants completely as a way to prevent people from eating too much fast food? Explain your answer.

10. How, in your opinion, will people make healthier food choices?