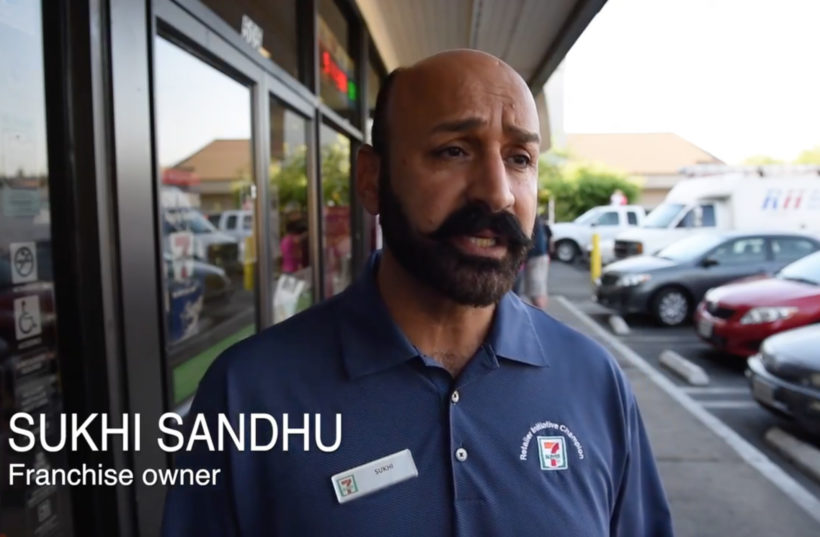 (by Kevin Valine, The Modesto Bee) – A Modesto 7-Eleven has turned to classical music to handle a problem that plagues many local stores: People who loiter, panhandle and sleep in front of the businesses.

Since last summer, the convenience store at McHenry and Morris avenues near downtown has been playing the music 24-7 from the two speakers mounted outside the front of the store. Details on the music were not available, but the sound blaring from the speakers Thursday afternoon was opera.

It could be heard in front of the store and throughout the parking lot, but not inside.

Store owner Sukhi Sandhu said the music has been very effective in reducing the number of people loitering and sleeping at the store. He said the music creates a better environment, customers feel safer, and it eliminates any risks clerks face when asking loiterers and panhandlers to leave.

“This is a win-win situation,” Sandhu said. “I’m hearing nothing but positives.”

Several customers and a homeless man said Thursday afternoon that fewer people are hanging out at the convenience store, though one customer said she has not noticed a difference and another said people just moved to other nearby locations to hang out.

“Once the music started, the riffraff left,” said 47-year-old Manuel Souza, who is homeless and jokingly referred to himself as one of the riffraff. “It’s hard to hang out and gossip and joke around.”

But he stressed — and Sandhu agreed — that not all of the people who were hanging out were homeless. Souza was standing under a tree along a sidewalk by the store with a Big Gulp but still within earshot of the music. “It’s OK with me,” he said. “I like it.”

One customer who declined to give his name said he would like the music to be played downtown, and in particular, at the McDonald’s across from the Transportation Center. He said he constantly is being hit up by panhandlers at the fast-food restaurant.

“It’s getting to be a joke downtown,” he said.

Sandhu said the music is part of a 7-Eleven program that uses non-confrontational methods to reduce loitering and similar behavior.

He said these methods include what he called a mosquito device, which he is using at his Ceres and Stockton stores. He said the device emits a high-pitched screech similar to a mosquito buzzing in your ear. He said clerks turn the device on and off as needed.

Sandhu said it has worked but not as well as the music and he plans on changing the two stores from the mosquito device to the classical music.

He owns eight 7-Elevens in the Northern San Joaquin Valley and said he is only aware of one other 7-Eleven in the valley that is taking part in the program, a Merced store that uses the mosquito device.

7-Eleven’s corporate office provided this statement but would not respond to other questions: “We test a variety of programs in our stores that promote an excellent experience for our customers. We have received very positive feedback from our customers about the atmosphere created by the music devices piloted in several 7-Eleven stores across the US.”

But these measures are not new. According to several media accounts, convenience stores — including 7-Elevens in Canada — and other businesses as well as public facilities have used classical music and the mosquito devices over the years to repel panhandlers, the homeless and loitering teenagers.

From modbee. com. Reprinted here for educational purposes only. May not be reproduced on other websites without permission from The Modesto Bee.

1. What problem is a California 7-Eleven owner addressing with music?

2. What types of music does the owner play outside the store?

3. What did the store owner say about effectiveness of the music?

4. In addition to music, what method have some businesses taken to discourage loitering, etc.?

5. How have customers responded to the owner Sukhi Sandhu’s strategy?

6. What do you think of this strategy for dealing with panhandlers and people loitering, including groups of teens?

(For the mosquito noise device, listen to the sound for your age group at movingsoundtech.com. – scroll down and see right column)