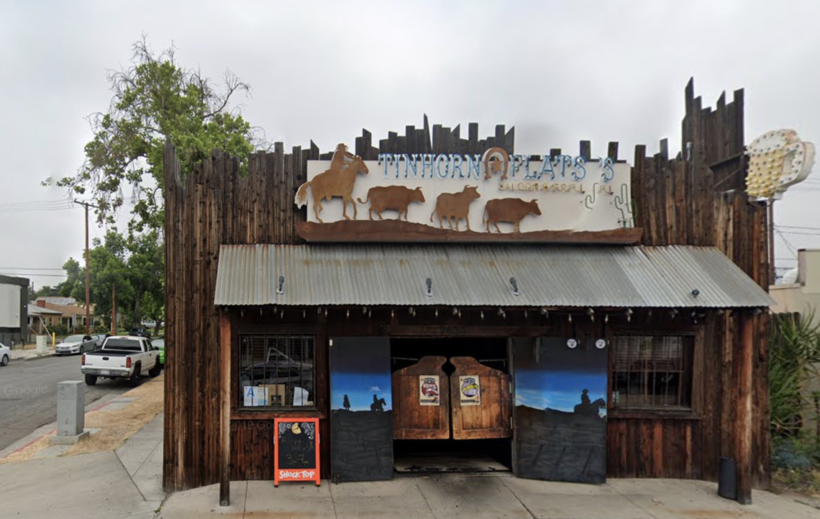 Los Angeles Superior Court ordered padlocks and the power shut off for Tinhorn Flats Saloon & Grill after it was accused of operating despite COVID orders.

(NBC Los Angeles) — A judge ruled Tuesday, March 16 that the city of Burbank can padlock the doors at a Burbank bar and restaurant that has continued operating despite the issuance of a temporary restraining order (TRO) allowing the city to enforce its closure order.

After the city padlocked the business, the owners of Tinhorn Flats removed the doors..

“We found out a judge signed off on padlocking our doors, so we took matters into our own hands,” said co-owner Lucas Lepejian. “If you don’t have doors, there’s nothing to padlock. We will continue to operate.”

Los Angeles Superior Court Judge Mitchell L. Beckloff initially handed down the TRO March 8 against … Tinhorn Flats Saloon & Grill on Magnolia Boulevard, but he did not immediately authorize disconnecting the power or the padlocking of the doors.

[He did later] after the city presented evidence that Tinhorn Flats continued to stay in business despite lacking the necessary permits to do so. [The city had revoked the businesses’ permits because the owner “disobeyed” the city and refused to “comply” with the bureaucrats’ order].

On Friday (March 12), the judge said the city could disconnect the electricity to the restaurant with 24 hours’ notice, but the eatery stayed operating Saturday and Sunday using generators, according to the city’s court papers. So, Burbank lawyers returned to court on Tuesday (March 16) and obtained permission to padlock the doors until the business obtains all the legally required permits. [The city had revoked the permits and gave no word on what the restaurant needs to do to regain their permits].

“Repeating the mantra, `We will not comply,’ [Tin Horn Flats] apparently has no intention of ever complying with this court’s orders,” the city’s attorneys state in their court papers. “[Tin Horn Flats] and its agents, employees and representatives have continued to blatantly disobey the court’s TRO by remaining open, encouraging crowds of customers to come and now operating on generators and cooking and serving food made on a barbecue.”

The judge has scheduled a March 26 hearing on whether the TRO should be extended with a preliminary injunction and whether the business should have to pay $1,500 in sanctions.

The city maintains the restaurant is an ongoing public nuisance.

“Defendants’ continued operations without a public health permit and CUP, especially in the midst of the COVID-19 pandemic, demonstrate defendants’ flagrant flouting of the code, regulations, rules, and standards required for health and safety practices in businesses such as restaurants,” the suit states. “Allowing this to go unchecked could embolden other restaurants and facilities to flout the same permit requirements, which would further undermine public health and safety.”

The county and city actions took place after numerous complaints were received [from busybodies] about the restaurant’s continued offering of outdoor dining on its patio [in an attempt to stay alive] in violation of the applicable health officer orders at a time when such activity was banned in Los Angeles County, according to the suit. The ban on outdoor dining was relaxed in late January.

“The vast majority of restaurants did their part and acted as good citizens by complying with these orders, despite the tremendous difficulty and hardship they have suffered as a result,” according to the city’s court papers. “Not everyone has borne the sacrifice willingly.”

Published at nbclosangeles .com. Reprinted here for educational purposes only. May not be reproduced on other websites without permission from The Hill.

3. a) When did outdoor dining re-open in Los Angeles County (including the city of Burbank)?
b) When did the city petition the court for a TRO?

4. The judge later gave the city the power to disconnect the power and then padlock the doors of the business when the city gave him proof that Tinhorn Flats continued to stay in business despite lacking the necessary permits to do so. Why did the restaurant lack the required permits?

5. a) From paragraph 10: “The city maintains the restaurant is an ongoing public nuisance.” Define public nuisance.
b) Do you agree with the city’s assertion about the owners of Tin Horn Flats? Explain your answer.

6. What claims does the city’s suit make against the owners of the restaurant and their attempts to stay in business (to not go out of business by having to remain closed)?

7. a) Watch the videos under “Resources” below. Consider the timeline for the city’s ongoing attempts to shutter this small business what would most likely be permanently (see “Background” below). Is it necessary for the city to do so – to make an example of the owners who the city says did not “act as good citizens by complying” – especially considering the fact that outdoor dining re-opened at the end of January? What do you think of the owners’ attempts to survive? Explain your answer.
b) Ask a parent, and a grandparent, the same question.

OPTIONAL: In what appear to be vindictive actions by elected government officials and bureaucrats across the country, small business owners who implemented safety measures and tried to stay open were treated like disobedient/defiant children, or even criminals, not taxpaying business members of the community. Some have been arrested or their customers were arrested. Many have received thousands of dollars of fines per day and had state licenses needed to operate legally revoked.

Search the internet for a report on one of the two stories above. What do you think? Do you support the government officials treatment of the owners? If they were your elected officials, would you vote for them again? Or, would you support those who tried to keep their cities or states open?

Did you know?  Small business owners have been the recipients of vindictive bureaucrat overreach across the country: