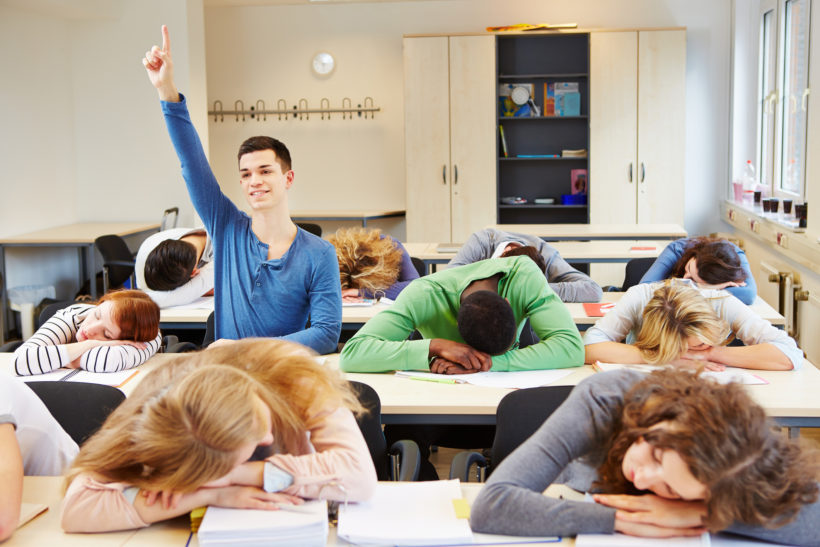 SACRAMENTO (CBS13) — A California bill that would let students sleep in longer is now on Gov. Gavin Newsom’s desk.

If the governor signs the bill, California would become the first state to mandate schools to start later in the morning.

Rural counties would be exempt from specified start times.

Questions have been raised about the cost. Bill analysis shows tens of millions of dollars statewide would [be needed to fund the law]. That money would go to districts t make changes to school transportation routes, and hire additional bus drivers. School districts would need an additional amount, projected in the low millions, to add staff both before and after school. Districts would also need hundreds of thousands of dollars for “additional workload associated with collectively bargaining work hours.”

Opponents pointed out a later start time would create unintended costs and consequences for working parents responsible for getting their children to school and still arriving to work on-time.

“…the permissive nature of the California Education Code currently allows Local Education Agencies to set their own start times. The fact that today more than one in five school districts voluntarily meet SB 328’s standards proves the bill is unnecessary for communities that would be well served by later start times.

For communities and school agencies that would be burdened by a later school schedule, however, SB 328 would present tremendous difficulties with significant opportunity costs. And because school schedules have such a wide-ranging and significant impact on operations and expenses, a great number of districts would be hurt by this legislation for a number of different reasons. Determining school schedules is a decision that even more than most should reflect specific conditions and be decided locally, not from Sacramento.”

Currently, more than three-quarters of middle and high schools in California start before 8:30 am.

A study done by the American Academy of Pediatrics said teens not getting enough sleep was “an important public health issue that significantly affects the health and safety” of students.

“This is a one-size-fits-all approach that is opposed by teachers and school boards. Several schools have already moved to later start times. Others prefer beginning the school day earlier. These are the types of decisions best handled in the local community.”

The bill’s author, Senator Anthony Portantino, wrote the bill is needed because, “The leaders of local school districts are or should be well-aware that requiring students – especially adolescents – to wake, travel to school, and learn during early morning hours is contrary to the developmental needs and biological sleep cycles of growing minds and bodies. Yet, only a handful of districts have been proactive in doing what is right for students by making the change back to traditional school hours, which prior to the 1980s had most school opening between 8:30 and 9 a.m. Today, most middle and high schools begin at or way before 8 a.m.”

They say it’s harder to fit in time for homework after getting home late from athletics, and their grades are taking a hit. But Vacaville District leaders say since this policy started, the data they’ve taken is mainly positive.

Other students agree with that.

“I like it because last year I used to skip first period a lot so my grade in that class dropped a lot. But this year, because I get to sleep longer, I’ve been getting to school on time,” said senior Nika Nowroozi.

If SB 328 passes Vacaville could be one of the model districts for the state.

Published at Sacramento .cbslocal .com on Sept. 14. Reprinted here for educational purposes only. May not be reproduced on other websites without permission from CBS 13 Sacramento.

1. a) Define mandate.
b) What would the proposed California law mandate?

2. a) Define exempt.
b) Who would be exempt from the start times required in the new law?

3. For what reasons would school districts need tens of millions of dollars if the bill becomes law?

4. What problem do opponents of the bill say many parents would have if it becomes law?

6. For each of the following, state whether you agree or disagree and explain your answer.

7. a) What do you think is the best time for school to start? Explain your answer.
b) Ask a parent – and then a grandparent – the same question.