Britain Turns into No Fly Zone Due to Volcanic Ash Cloud

(by Alastair Jamieson and Caroline Gammell, Telegraph.co.uk) – British airspace has been turned into a no-fly zone as all flights from and to the UK were suspended due to a massive volcanic ash cloud caused by an eruption in Iceland.

Tens of thousands of passengers have been left stranded as hundreds of flights were cancelled and airports shut down throughout the day.

Eurostar has been inundated with people trying to make alternative travel plans.

All flights were suspended from midday to 6pm on Thursday and British Airways cancelled all its flights until 6am on Friday.

Ryanair also cancelled its flights to and from Britain and warned of cancellations and delays tomorrow.

By lunch-time, most airports had started to empty as passengers decided not to start their journeys or went home soon as they found out what was happening. 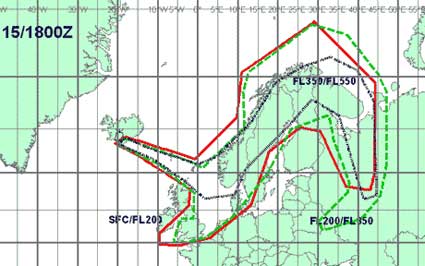 The Eyjafjallajökull volcano continues to erupt and is still spewing ash into the atmosphere which is gradually tracking south actross Scandinavia, Britain, France and Belgium.

The Met Office said it was constantly monitoring the ash cloud but that the north westerly winds were due to continue, pushing the plume of particles further south.

[Norway’s] Oslo airport has closed, and flights to and from other parts of northern Europe have also been disrupted.

Forecasters believe the ash could take a number of days to disperse, although it is not known how long disruption to air space will last.

Volcanic ash, which consists of the pulverised rock and glass created by the eruptions, can jam aircraft machinery if a plane flies through the plume, shutting down the engines.

Ash can also be sucked into the cabin itself, contaminating the passengers’ environment as well as damaging the plane’s electronic systems.

The disruption could go on for some time,” said Dr Steve Bond, lecturer in aircraft operations at City University London. “It depends on how long the eruption goes on for and weather conditions.

“When there was an eruption over Java in 1982 an aircraft ran into difficulties 19 days after a British Airways plane had problems.

“There is a risk of engine failure because of the ash. The problem with aircraft radar is that it is designed to pick up clouds of moisture and it won’t detect ash.

“This is why you have to take precautions and keep aircraft out of the area.

Meanwhile British Airways said passengers whose flights had been cancelled because of the ash could rebook at a another date or claim a refund.

[Scotland’s] Edinburgh, Glasgow and Aberdeen airports are closed until further notice and passengers are advised not to travel to the terminals.

A spokeswoman for easyJet, which has cancelled dozens of flights at Luton and Scottish airports, said: “Following the eruption of a volcano in Iceland yesterday, an ash plume has entered UK and Scandinavian airspace overnight.

“As a result NATS have closed parts of UK [United Kingdom] airspace and this is causing significant disruption to all airlines due to operate flights to and from the UK today.

“EasyJet passengers are advised to check the website before they leave for the airport for any disruption information.”

Heathrow’s second biggest scheduled airline, bmi, has cancelled all flights between London and Scotland until later today. It said: “We recommend that customers whose journey is not essential book for an alternate date. Customers who have booked and are still intending to travel should consult the flight status page for the latest information.”

Matt Dobson, a forecaster for MeteoGroup, the weather division of the Press Association, said: “The concern is that as well as the eruption, the jet stream passing through Iceland is passing in a south easterly direction, which will bring ash to the north of Scotland and Denmark and Norway. But it is impossible to say how much ash will come down.

“It could be a threat in these areas from now until tomorrow or Friday.”

A spokesman from Nats said: “The Volcanic Ash Advisory Centre has issued a forecast that the ash cloud from the volcanic eruption in Iceland will track over Europe tonight.

“NATS is working with Eurocontrol and our colleagues in Europe’s other air navigation service providers to take the appropriate action to ensure safety in accordance with international aviation policy.”

Weather forecasters said the ash plume could drift over British airspace during the night, causing significant disruption to services.

The movement of the plume, which has been drifting eastwards, is being monitored by both the Met Office and NATS, the air traffic control service.

There have been a number of incidents where aircraft have reported damage from ash, including one involving a British Airways Boeing 747 in June 1982.

The aircraft ran into difficulties after the eruption of a volcano at Galunggung, Indonesia. Ash jammed all four engines briefly, and the aircraft plummeted 24,000 feet before they could be restarted.

Because of the threat to aviation, a global early warning system, known as the International Airways Volcano Watch, has been established. Iceland is considered as particularly vulnerable to volcanic disruption.

Authorities there yesterday evacuated 800 residents from around the Eyjafjallajokull glacier as water gushed down the mountainside and rivers rose by up to 10 feet (3 meters).

The Eyjafjallajökull volcano erupted for the first time in 200 years on March 20, in a dramatic display that sent fountains of lava spewing into the air.

The first eruption did not trigger any major flooding, as was initially feared, because the active vents were in a mainly ice-free part of the volcano.

But Tuesday’s eruption came from a different vent beneath a 650-ft (200m) thick block of ice, unleashing a torrent of glacial meltwater.

1. How has the eruption of the Eyjafjallajokull volcano in Iceland affected people traveling through Great Britain? Be specific.

2. Over what other countries might the volcanic ash travel?

3. When do forecasters predict the ash will subside to permit safe air travel in the region?

4. Planes fly through fog – why can’t they fly through volcanic ash? Describe problems associated with flying through it. Be specific.

5. When was the last time Eyjafjallajokull erupted?

Go to worldatlas.com for a map.

Visit the website for the Met’s Volcanic Ash Advisory Center at metoffice.gov.uk/aviation/vaac.

Watch a video of the erupting volcano from the Telegraph at telegraph.co.uk/news/newsvideo/7592941/Icelandic-volcano-spews-ash-cloud-into-atmosphere.html.

For more video, go to telegraph.co.uk/earth/earthvideo/7500544/Active-Icelandic-volcano-new-pictures.html.