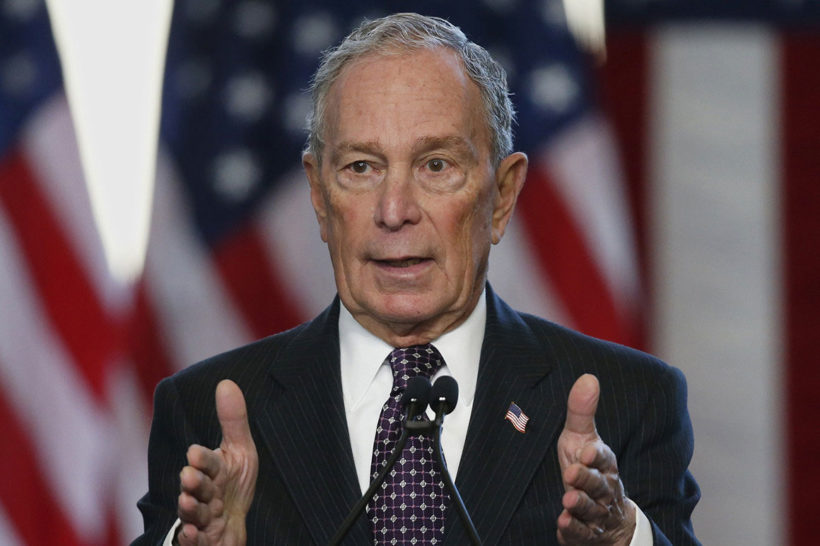 (by Alexandra Jaffe and Kathleen Ronayne, Associated Press)  WASHINGTON – For Mike Bloomberg, the one-way conversation with Democratic voters is about to end.

By spending more than $400 million of his own money and largely bypassing his opponents by skipping the early primary states, Bloomberg has rocketed to double-digit support in enough national polls to qualify for both [tonight’s] Nevada debate and next week’s debate in South Carolina.

But as Bloomberg’s support has risen, so has the criticism from his Democratic foes as well as the broader scrutiny of his past comments and record as New York City mayor. As he faces his rivals onstage for the first time, they’ve made it clear they’re eager to take him on. …

It will be the first time he’s debated in over a decade. And the first time in this campaign that Bloomberg will have to answer before a national audience for racial and sexist comments he’s made in the past. Mark Green, the former New York City public advocate who ran against Bloomberg for mayor in 2001, says that could be tough.

“His insulting, wise-guyish comments on race and women and justice will not be easy to parry if the moderator or rival frames the questions correctly,” he said.

A new NPR/PBS NewsHour/Marist poll published Tuesday showed Bloomberg with 19% support nationally in the Democratic nominating contest, a striking figure for a candidate who has joined no debates and competed in no primaries.

While Bloomberg is appearing on the debate stage in Nevada, he still is not participating in Saturday’s state caucus. He’s skipping the first four voting states — Iowa, New Hampshire, Nevada and South Carolina — in favor of focusing on the multitude of states that vote March 3, Super Tuesday.

Trying to keep expectations in check, aides have repeatedly noted in recent days that Bloomberg’s rivals have had multiple debates to hone their skills and talking points. On the campaign trail, he’s still using a teleprompter to deliver his short stump speeches, and he rarely takes questions directly from voters.

His aides have also emphasized that the former mayor is expecting fire from all angles, particularly on his status as a billionaire self-funding his campaign and on the “stop-and-frisk” police practice he employed in New York.

But Tim O’Brien, a senior adviser to the campaign, said the debate will be a chance to showcase Bloomberg’s focus and claims to deliver on key Democratic issues, like climate change and gun control.

“The debate’s a chance for us to make it clear that this is a deeply compassionate and principled man who isn’t just a rich guy on a vanity run,” O’Brien said.

Bloomberg’s opponents have telegraphed an array of attacks.

Biden has gone after him on issues relating to race, noting his past comments suggesting ending racist mortgage-lending practices known as “redlining” contributed to the financial crisis, and that Bloomberg’s ads often feature Obama prominently, though the businessman has been a critic of Obama in the past.

Klobuchar argued this weekend that voters wouldn’t want another billionaire in the White House and that her blue-collar background makes her a stronger candidate than the former mayor.

Buttigieg said that Bloomberg will have to answer for reports alleging he has a long history of sexist comments and behavior in his business.

Warren and Sanders have perhaps been Bloomberg’s sharpest critics, as both see him as a useful foil to their [progressive/socialist] campaign messages. At a campaign rally this weekend, Sanders derided Bloomberg for skipping the early primary states and mocked his riches, joking to the crowd that the businessman is “struggling, he’s down to his last $60 billion.” [Sanders and Warren are millionaires.]

“I think you’re going to see us go toe-to-toe with Bernie Sanders on important issues,” he said.

“Bernie’s a millionaire, Bernie’s got a troubled record on criminal justice, he supported the 1994 crime bill,” O’Brien said. He said Sanders has previously voted to give gun makers immunity from lawsuits. Sanders has since changed his position.

Bloomberg’s other big challenge could be maintaining his cool on the debate stage amid what’s certain to be a volley of attacks from rivals and tough questions from the moderators. The former mayor has a history of becoming short or testy during press conferences, and is known for his unfiltered comments behind closed doors.

To prepare him, aides have been holding mock debates with Bloomberg in a warehouse office in downtown New York, with some of his top communications advisers playing his opponents. Senior advisers Howard Wolfson and Marcia Hale are playing Sanders and Klobuchar respectively, while Marc LaVorgna and Julie Wood, two longtime mayoral aides who now serve as campaign spokespeople, are playing Buttigieg and Warren. …

Green, his former mayoral opponent, said that when he debated Bloomberg the former mayor “was…able to memorize enough of an answer that he’ll get by.”  [Green thinks] the average voter “will probably say ‘well, he was OK.’”

Published by AP .com on Feb. 18, 2020 1:09 PM CST / Updated 2:45 PM CST.  Reprinted here for educational purposes only. May not be reproduced on other websites without permission from the Associated Press.

4. What top issues does Bloomberg hope to present to voters during tonight’s debate?

5. List the Democratic candidates who have qualified for tonight’s debate.

6. The Democratic candidates have pointed out that Bloomberg the billionaire is buying his way to try to become the nominee and that this is not fair. What do you think?

Michael Bloomberg has spent $400 million of his own money on campaign ads. He has not accepted donations to avoid qualifying for debates thus far.

Now that the DNC has dropped the donation threshold requirement and only requires over 10% support in the polls for a candidate to qualify for the debates, Bloomberg qualifies for the debate.

The AP reporters note that Bloomberg is “still using a teleprompter to deliver his short stump speeches, and he rarely takes questions directly from voters” while campaigning.

Videos and lawsuits have surfaced that opponents say show Bloomberg as out-of-touch, elitist, racist, sexist. He insults farmers and says elderly people won’t be eligible for life-saving medical treatment. Opponents want to challenge him on these questions.

Watch the debate.
a) List the questions asked.
b) Do you think the moderators asked challenging questions to Bloomberg – and/or to the other candidates?
c) Were the questions fair to each candidate?
d) How did Bloomberg respond to each? (satisfactorily or not? – Explain)
e) Who do you think won the debate? Why?

See a list of Primary Debate Questions at: the 2020 Presidential Election page.