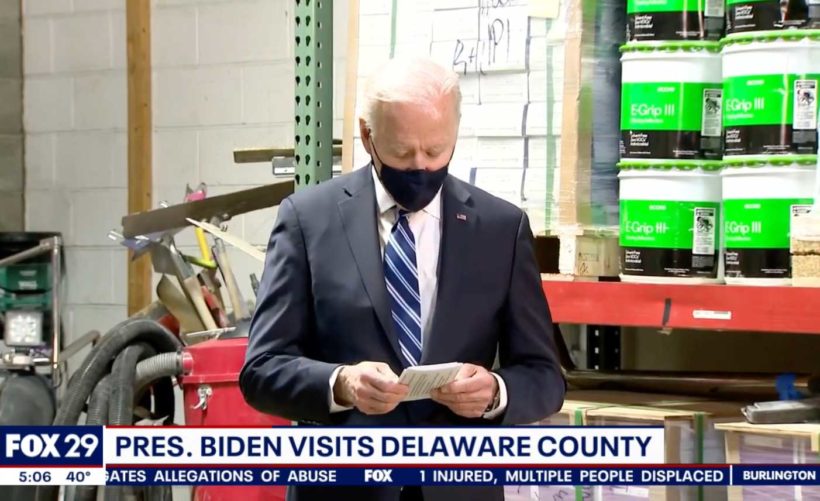 President Biden kicked off his “Help is Here” tour on Tuesday to promote his just-signed $1.9 trillion COVID-19 stimulus bill (the American Rescue Plan).

Democrats pushed the stimulus bill through Congress without any Republican votes in the Senate or House by using budget reconciliation rules that allow for a bare majority in the evenly split Senate, where the vice president – Kamala Harris – breaks tie votes.

The president spoke for about 3 minutes with the owners of Smith Flooring Inc in Chester, Pa., before reporters were escorted out.  Mr. Biden then went to his home in Wilmington, Delaware, which is aproximately a half-hour drive from the business. It was his fourth overnight trip home since taking office Jan. 20.

Every president’s public appearances are public record – text and video.  Read the transcript below from President Biden’s Tuesday visit to Smith Flooring Company in Chester, PA to promote the Democrats’ stimulus bill:

And I’m not being solicitous when I say these are two of the finest congressmen in the United States Congress in terms of getting things done.  I really mean it.  And, you know, the American Rescue Plan is going to do more than just provide for the PPE.

And one of the things that we’ve done early on — they passed the CARES Act early on.  And what we did — what they did was they provided for an inspector general — an outfit to look over where the money was going to make sure that it was spent properly.  And the first thing the President did: he came along and he fired the inspector general.  And we found out that only 40 percent of the people who, in fact, were small businesses got in on the deal.  And they got very big businesses getting the lion’s share of that money.

So when we wrote this Rescue Plan, they were (inaudible) insistent that we have an inspector general to make sure the money goes exactly where it’s supposed to go.

And so we’re in a position where it’s going to bring immediate relief — $1,400 — to 85 percent of the American public.  I said, yesterday, we’re going to get 100 million shots in people’s arms within the first 60 days of my administration and 100 million checks out — 100 million people are going to be getting, not a joke, a check for $1,400, which would change their lives.

And you know so many of the people who have worked (inaudible) and gotten themselves laid off or there wasn’t work, and you find yourself, you know, it’s hard paying the rent, hard paying the childcare, hard paying for much of anything.

So I just think that — I hope that the program that we’re having here — we’re going to have a tax cut to help retired workers.  We’re in a situation where we’re going to expand the paytech [sic] — paycheck — Paycheck Protection Program (PPP) for the folks who were initially shut out.

Initially, at the very beginning of the Paycheck Protection Program, you’d go to a big bank, they’d say, “Do you have an account with us?  Have you borrowed money from us?  Do you have a credit card from us?”  They didn’t want to deal with people who were on the short side of things.  But you’ve really made it work.  And I think you should be aware: More help is on the way, for real.

Do you have questions for me at all?

MS. SMITH:  Well, we don’t have any questions, but we did want to say thank you.  Thank you for your being who you are.  Thank you for helping the small business — small minority business.  It means a lot that you’re here in Chester.  It means a lot that you came to see our business because, you know, although Congresswoman Scanlon and Congresswoman Hou- — Houlahan, I’m sorry.  I know Congresswoman Scanlon a little more.  (Laughs.)  I’m sorry.  But not many people come out and stop here in Chester.  And so we’re just grateful.  We’re grateful for the things that you’re doing.

THE PRESIDENT:  Every time I got stop — stopped in Chester, I lost.  I went to school in Claymont, just across the line at Archmere Academy.  And we played up here, and you better come prepared to play against Chester.   (Laughter.)

THE PRESIDENT:  (Inaudible) playing Chester.  So a lot of my buddies are from Chester, for real.  The people I grew up with.

And it’s — you know, one of the things that we haven’t — and we’re trying like the devil to make sure to correct is: People who are hardest hit by — and the Congresswoman knows this better than I do — the hardest hit are people in the minority communities.  The rate at which they get COVID is significantly higher sometimes in the Latino community, black community — four times greater — and the death rate is significantly higher.

And I want to thank you both.  And everybody in this county and the next county, in Delaware County, should thank you as well.

So is there anything else we can be doing?

THE PRESIDENT:  How many employees at your peak?

THE PRESIDENT:  I think it’s going to allow you to bring folks back and increase — increase your business.

MR. SMITH:  And it’s great that schools got funding, so now the schools are going to do some construction and (inaudible).

1. What is the purpose of President Biden’s “Help is Here” tour?

2. What main points did President Biden highlight in his talk to/with the owners of Smith Flooring in his first stop of his “Help is Here” tour?

3. How does President Biden say the the $1,400 checks will affect the Americans who will receive them?

5. How did Smith Flooring co-owner Kristin Smith respond to President Biden when he concluded his remarks by asking “Do you have questions for me at all?”

6. The video of President Biden’s speech at Smith Flooring on the first stop of his “Help is Here” tour is not on the White House youtube page that should provide all of the President’s public remarks/speeches/appearances — nor was it found through an internet search.

a) Do an internet search to try to find the video of the speech/appearance in full. (The text is at WhiteHouse.gov as it is public record – there is no way for the White House to neglect posting it.)
During President Trump’s term in office, the text and entire video was published for every appearance / meeting / speech he gave.
Why do you think neither the White House official page, YouTube, Twitter, Instagram pages, nor President Biden’s social media pages, posted President Biden’s speech in Pennsylvania for all to see?

b) President Biden received 80 million votes – all who voted for him are eager to hear directly from the President in his “Help is Here” tour about the progress being made. The White House Press Corps – or Traveling Press Corps – travels with the president, reporting on his speeches, etc. Why do you think no media outlets posted the President’s remarks in full? (They were only 3 minutes – 6 total including his conversation with the owners of Smith Flooring)

c) Do an internet search for “President Biden visits small business in Pennsylvania Help is Here tour” to find news reports. Compare the news reports to the full text you read above. What do you observe about reports vs. the text?

7. a) Do an internet or WhiteHouse .gov search to find a list of stops President Biden will make to showcase the Democrats’ $1.9 trillion “American Rescue Plan.” List the stops/dates.

b) Challenge: As each appearance is made, find the WhiteHouse videos of the event. What is your reaction each visit?