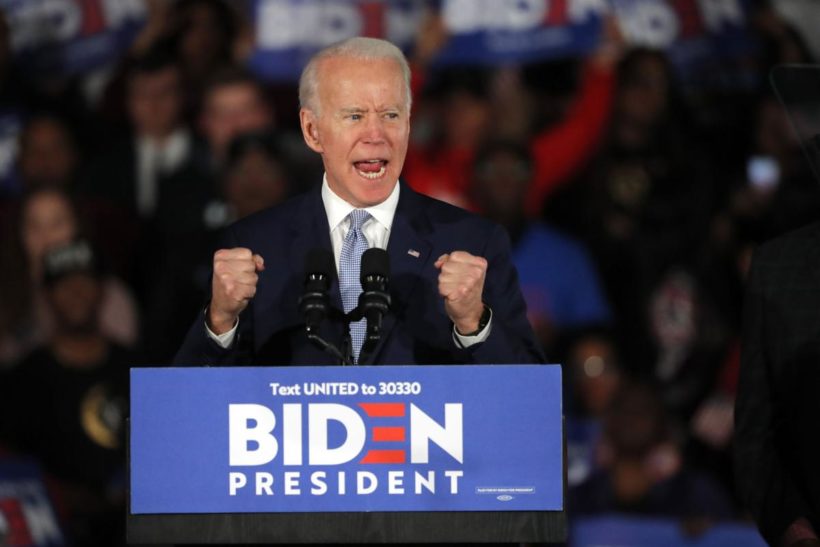 Joe Biden reacts to his victory in South Carolina.

(by Mark Moore, New York Post) — Fresh off his resounding win in the South Carolina primary, former Vice President Joe Biden downplayed expectations that his campaign must do well on Super Tuesday [tomorrow, March 3rd] by saying there are still “big states” that have yet to vote.

Biden, speaking on “Fox News Sunday,” said his first-place finish with 48.8 percent of the vote is a “big boost” that starts a “real comeback” for his campaign, but added that “we have a long, long way to go. This is a marathon.”

Fox News’ Chris Wallace noted that Biden is at a disadvantage in the 14 states that vote on Tuesday because other campaigns like Sen. Bernie Sanders’ and Mike Bloomberg’s have spent more money and have a larger presence on the ground.

Wallace asked Biden what happens if he gets “clobbered” on Tuesday when 34 percent of all delegates will be up for grabs.

“It surely doesn’t help. But there’s a lot of big states coming up after that,” Biden said, noting that primaries will still be held in Florida, Georgia, Pennsylvania and Michigan.

“I’m not a pundit, and I’m not being a wise guy, I’m being deadly earnest: I feel good about where we are,” Biden said. “I think it’s about the message, I think that people know who I am, I think we’ve now begun to raise money, I think things are picking up but we’ll see.”

Biden was asked how he can compete with Bloomberg, a billionaire who has spent more than $500 million since entering the 2020 race in November and has bought three minutes of TV time on two networks for a prime-time address Sunday evening.

“On your show, by doing as much of the free press and earned media as I can,” Biden replied. “Money can buy a lot but it can’t hide your record and it can’t make you something that you are not. Mike is a solid, serious guy, he’s in the debates now and we’re able to discuss the differences that we have.”

“But I think the Democratic Party is looking for a Democrat — not a socialist, not a former Republican, but a Democrat — to be their nominee,” Biden added.

He was also asked about concerns expressed by some Democrats that Sanders’ [socialist] progressive views could have a negative effect on down-ballot congressional and state elections, and whether moderate* candidates should rally against Sanders. [*While Biden promotes himself as the moderate candidate, looking at his views on the issues, he is a progressive.]

“It’s not for me to tell any other candidate they should get out of the race, they’ll know whether or not they remain viable,” Biden said. “I think the primaries that are going to follow are going to winnow that field.”

Published at NYPost .com on March 1, 2020. Reprinted here for educational purposes only. May not be reproduced on other websites without permission from the New York Post.

1. a) List the four states in date order that have held early primaries or caucuses.
b) How many states are holding primaries on Tuesday (Super Tuesday)?

2. What percent of all delegates are included in the Super Tuesday states?

3. Why does Fox News anchor Chris Wallace say Joe Biden is at a disadvantage going into Super Tuesday?

4. a) How did Vice President Biden respond to Chris Wallace’s question about what he will do if he gets “clobbered” on Super Tuesday?
b) For what reason did Biden say he feels good going into Super Tuesday?

5. Billionaire Mike Bloomberg, who has spent more than $500 million of his own money but skipped the four early voting states, will be on Tuesday’s ballots. What did Joe Biden say about why he thinks he is in a better position than Bloomberg, despite the huge disparity in spending?

6. a) Former Vice President Biden spoke very mildly when questioned about socialist frontrunner Bernie Sanders. Do you think if the number of delegates for each is fairly close, the winner should ask the other to be his vice presidential running mate? And if he did, do you think the other should accept? Explain your answers.
b) Do you think the Democratic candidates who receive few, if any, delegates on Tuesday should then drop out? Explain your answer.

CHALLENGE: Follow up on Wednesday to note the number of delegates each Democratic candidate receives. 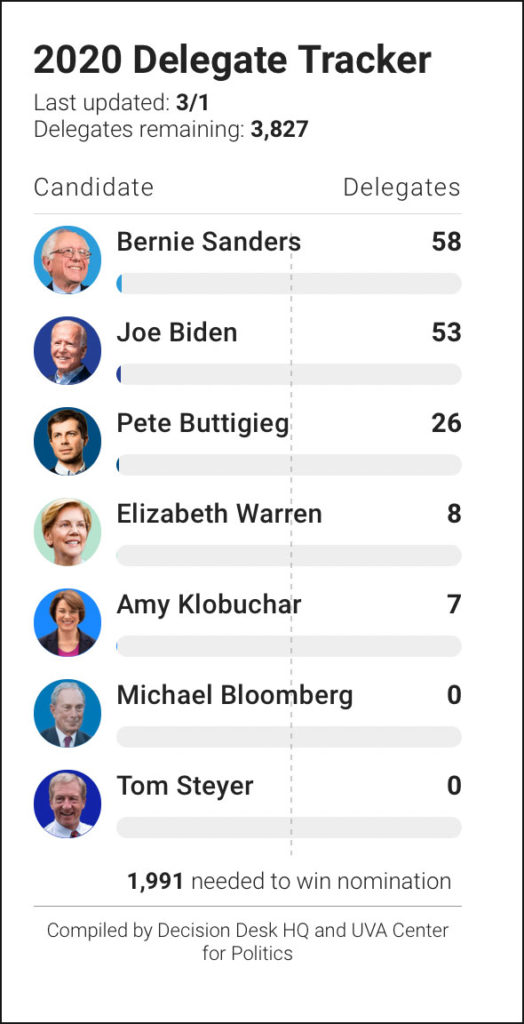 For a list of “Political Positions of Joe Biden” go to wikipedia.

For the “Democratic Candidates on the issues”, go to politico.