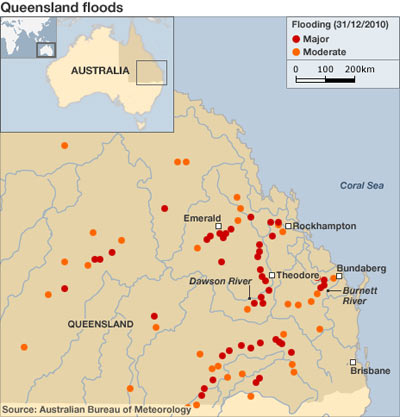 (by Lyndal McFarland, The Wall Street Journal, WSJ.com) MELBOURNE – The Australian military began rushing supplies to a town slowly being swamped by floodwaters Monday as authorities warned that floods devastating large parts of Queensland state are set to worsen in some areas.

A proper assessment of damage is expected only after the floodwaters, which follow torrential rains associated with the La Nina weather pattern, recede. But many expect damage to run to billions of dollars.

Floods affecting an area the size of France and Germany combined have forced thousands of residents to flee their homes, impacting as many as 200,000 people.

So far two people have died, with the latest casualty a 38-year-old man whose boat was swamped in central Queensland. A 41-year-old woman died after being swept from a vehicle attempting to cross a flooded causeway. Another man is missing and feared dead after the car he was travelling in was swept from a flooded causeway in the state’s central west, police said.

Coal mining, haulage and export is the major industry in central Queensland, a major global source of coking coal used in steelmaking. Central Queensland and the Hunter Valley in New South Wales are the heartland of Australia’s US$51 billion-a-year coal export industry.

“There is likely to be a significant long-term effect of that, not only nationally, but also internationally,” she said, noting the state provides half of the world’s supply of coking coal, a key ingredient in steelmaking. “So there is a remarkable problem out there in the mining industry…They will have a long, slow climb back to full production,” she said.

Crops and livestock have also suffered.

“We are going to see an economic impact, there’s no doubt about that,” Prime Minister Julia Gillard told ABC Radio Monday. “When floodwaters recede, we’re going to see a lot of damage to roads, to bridges, to schools, to the community facilities that everybody relies on. We can’t assess what that’s going to cost until we can see the damage.”

Water levels have begun to recede in some of the worst-hit areas around towns such as Emerald and Condamine. But residents of Rockhampton, a city of around 75,000 people 40 kilometers inland from Australia’s Coral Sea coast, were bracing for the worst, with the swollen Fitzroy River not expected to hit its peak until Wednesday.

Ms. Bligh said military aircraft will fly supplies to Mackay Airport, with 100 tons of food and supplies to be trucked to Rockhampton before the last road link to the city is cut. Floodwaters are expected to peak in Rockhampton at 9.4 meters on Wednesday after hitting 9 meters Monday.

Large parts of the city, including Rockhampton’s airport, are already underwater and authorities have warned the town could be cut off for more than a week. In addition to rising floodwaters, residents are battling poisonous snakes seeking dry ground, along with contaminated water.

Queensland will delay its mid-year budget review to take the flood impact into account, state treasurer Andrew Fraser said over the weekend.

“The cost to the state will be huge, both in direct costs such as rebuilding roads and other damaged infrastructure and providing relief payments to families, but also in lost income while the mining, agriculture and tourism sectors recover,” Mr. Fraser said in a statement Saturday.

Write to Lyndal McFarland at lyndal.mcfarland@dowjones.com.

1. How large is the area of Queensland, Australia that is currently flooded?

2. How many people have been impacted by the floods?

3. a) How has the flooding affected the coal industry in Australia? Be specific.
b) How will these disruptions affect people worldwide?

4. Read the “Background” below the questions. What additional production has been damaged by the flooding?

5. What damage does Prime Minister Gillard expect to face when the floodwaters recede?

ON THE FLOODING IN QUEENSLAND:

The six states of Australia and their capitals are:

The two mainland territories and their capitals are:

* Northern Territory – Darwin
* Australian Capital Territory, which is where Australia’s national capital of Canberra is situated.

For background information on Australia, go to the U.S. State Department website at state.gov/r/pa/ei/bgn/2698.htm.

Watch a news video from Queensland below: