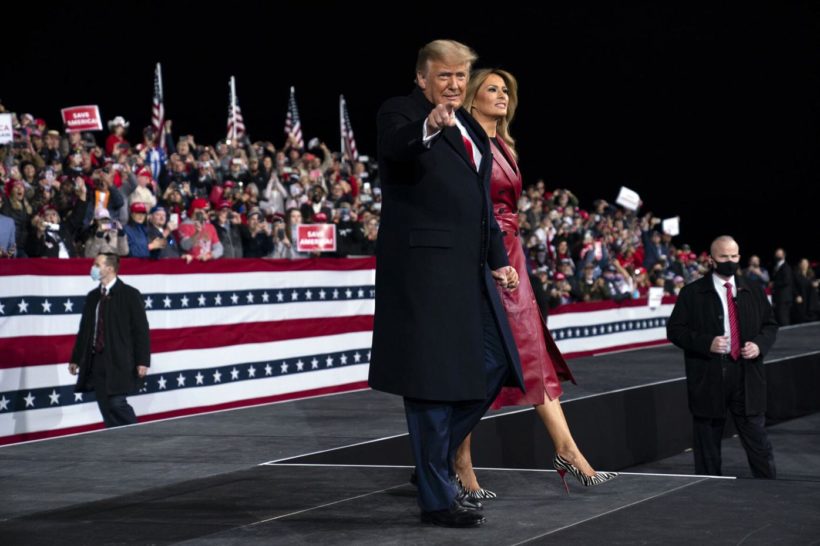 (by Charlotte Cuthbertson, Epoch Times)  WASHINGTON—As credible allegations of election malfeasance continue to emerge, the majority of Republican politicians remain on the sidelines, simply saying that the president deserves his day in court.

A dozen members of the Freedom Caucus held a press conference on Dec. 3 to urge Attorney General Bill Barr to investigate the claims of fraud, saying that a lack of clean elections and trust in the system will spell the end of the republic.

There are 196 Republican representatives in the House, and a scroll through the Twitter accounts of many found they were united last week in protesting against Democrats’ efforts to pass legislation on marijuana legalization instead of relief for small businesses.

But there were barely any posts that address election issues, amplify the election allegations made, or comment on the recent hearings held in the contested states—suggesting they’re avoiding wading in.

The representatives’ efforts, or lack thereof, don’t seem to match voter sentiment, considering that more than 70 percent of Republican voters are saying they don’t trust that the election was free and fair, according to a POLITICO/Morning Consult poll published on Nov. 9. (See “Background” below for a second poll)

In Georgia, more than 90 percent of Trump voters don’t trust the results of the presidential election, according to an online survey of more than 1,700 subscribers to the The Epoch Times on Dec. 7.

At a Trump rally in Valdosta, Georgia, on Dec. 5, the crowd broke out chanting “Fight for Trump! Fight for Trump!” as the two senators up for reelection, Kelly Loeffler and David Perdue, took the stage.

Meanwhile, President Trump has been urging Republicans to “get tough” as he continues to raise awareness of affidavits by election workers and poll watchers that allege election fraud, as well as statistical anomalies and potential legal aberrations. …

“One is the party of the rank and file—which is clearly behind Trump, as 95 percent voted for him. And the other is the old establishment Party, which is partly Never Trumpers and partly just establishment bores,” Simon said.

“So what you’re dealing with is a huge split between the actual people who vote Republican…and the people who are running the party. Now, not all of them, there’s some good people.”  But…[Republicans need to] “wake up and listen to their voters.”

… Congressman Gosar said more Republican politicians need to stand up despite the possibility of retaliation.

He said, “…We’re a nation of laws, and we have to have oversight.  I challenge everybody: If that’s the America that we live in, where you have to fear retaliation for doing the right thing, then this is a banana republic, not a constitutional republic. And we’re further down the line of communism.”

Gosar said politicians need to answer to the people, and those in the contested states should be demanding oversight.

He has lodged Freedom of Information requests with the Arizona secretary of state, the governor, the attorney general, and the Board of Supervisors in Maricopa County, to discover whether they did their due diligence.

“It’s hard for me to believe—maybe I’m wrong—that the Board of Supervisors did their due diligence with the [voting machine] software,” Gosar said.

As long as the election issues remain unresolved, Americans are finding out that their vote doesn’t really count, Gosar said.

“They get it, they’re not stupid. We won’t have a free and fair election ever again,” he said.

The Epoch Times reached out to seven other [Republican] Congress members, but none were available for an interview.

The Department of Justice didn’t respond to multiple requests for comment on election-related investigations.

1. What is the House Freedom Caucus?

2. What are some members of the Freedom Caucus calling on the Department of Justice and U.S. Attorney General William Barr to do?

3. a) Contrast the stand the Freedom Caucus members are taking compared to the rest of the Republican members of Congress.
b) Why do you think this is so?

4. What type of tweets are missing from most Congressional Republicans pages?

5. a) What did a Politico poll (and a Vox poll noted under “Background”) highlight about the more than 74 million Americans who voted for Donald Trump?
b) How should this information affect elected representatives (and senators) reaction/response to charges of election fraud from the Trump campaign following witness statements from poll workers, poll observers and others in the battleground states?
c) Do you think Democrats in Congress would have reacted with similar silence had Joe Biden (or Barack Obama in 2012) been in the place of Donald Trump? Explain your answer.

CHALLENGE: Scroll through the social media pages for the past month for the Republican congress members from your state. What do you think?

Did you know? A Vox poll determined 73 percent of Republican voters are questioning Biden’s victory:

According to the House Freedom Caucus’s official Facebook page:

“The House Freedom Caucus gives a voice to countless Americans who feel that Washington does not represent them. We support open, accountable and limited government, the Constitution and the rule of law, and policies that promote the liberty, safety and prosperity of all Americans.”