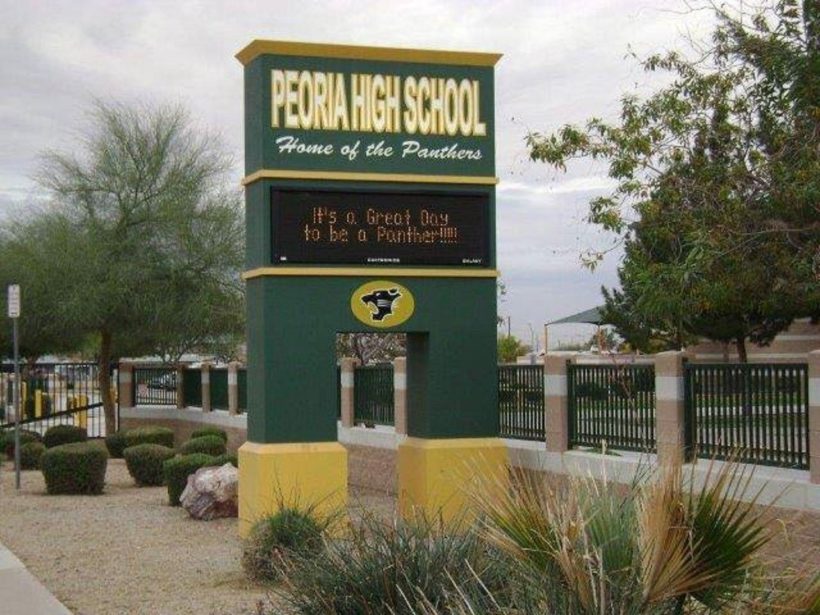 Cameron Torres, a senior at Peoria High School in Arizona, was ejected and suspended a game for high-stepping into the end zone

(by Richard Obert, Arizona Republic) – [An Arizona high school football player will miss his senior year homecoming game after being ejected from the game for high-stepping in the end zone following a spectacular catch during a match up last week (on Sept. 21).

The celebratory move cost Cameron Torres, a senior at Peoria High School, his second unsportsmanlike penalty of the game – resulting in an ejection and an automatic game suspension, The Arizona Republic reported.]

Ejections can’t be appealed to the Arizona Interscholastic Association (AIA). But it can be sent to the AIA with hopes that an error could be overturned. [Torres’ coach hopes the AIA will overturn the ruling after watching a video of the play.]

Peoria coach Will Babb said his emotions went “full circle” over the weekend over the play. He wants to make sure his players are held accountable.

But the more Babb looked at the scoring catch, the more he felt there was an injustice.

“I am really perplexed, because I am still not sure what he did wrong,” Babb said. “He did have high knees, but there is no rule against high knees. He scored, ran to the back of the end zone and celebrated with his teammates. I didn’t see it as taunting.

“My only concern would be if those evaluating this situation believe he shouldn’t have been ejected, but don’t overturn the suspension. Many times the politics of a situation won’t allow us do what’s right, even when we know it’s right.  I don’t blame anyone.  I just think a mistake was made.  We all make mistakes, but we all don’t get the chance to correct them and we should when opportunity presents itself.”

Peoria has sent its side to the AIA and the Arizona football officials’ leadership, but has not received any feedback yet.

“I would hope things work out for Cameron, as this is his senior season and his last homecoming game,” Babb said. “But if it doesn’t, he’ll still be supportive of his teammates and come out of this OK.”

Brian Gessner, head of officials for the AIA, said he’s not going to comment on whether it was the right call.

“I will tell you this, nobody works harder than these football officials,” Gessner said. “They are in the rule book, looking at video. They work hard at their advocation. It’s a judgment call. I’m not going to overrule judgement calls. This is a championship crew. I’m not going to comment on their judgment.”

[As of Sept. 26, the school hadn’t yet heard back from the AIA after sending its version of events.]

From AZ Central .com. Reprinted here for educational purposes only. May not be reproduced on other websites without permission from AZCentral.

1. For what reason did Arizona high school football player Cameron Torres receive a penalty after scoring a touchdown in the Sept. 21 game?

2. Why was Torres ejected from the game and also given an automatic game suspension?

3. The AIA doesn’t allow an ejection to be appealed. What is Coach Will Babb asking AIA to do?

4. a) Why is the coach asking AIA to overturn the referee’s ruling on the play?
b) What is the coach’s concern over the review?

5. Re-read paragraphs 6-9. What do you think of the coach’s tone/attitude?

6. a) How has the head of officials for the AIA responded?
b) What do you think of this response?

7. a) What is high stepping?
b) Watch the video. What do you think?: — Was Cameron high stepping? Was he taunting his opponents? Was this unsportsmanlike conduct?
c) Torres already had one penalty for unsportsmanlike conduct, which was not described in the article. Do you think whatever he did to cause the first penalty had any bearing on the ref’s call on the way he celebrated in the end zone?

8. Not knowing the player or seeing any of the games, it is hard to tell if he deserved his first unsportsmanlike penalty. Based on the coach it sounds like he generally displays decorum when playing. What do you think about the type of behavior high schools expect from their athletes compared to the type of behavior displayed by NFL players?

Watch a video of the touchdown: