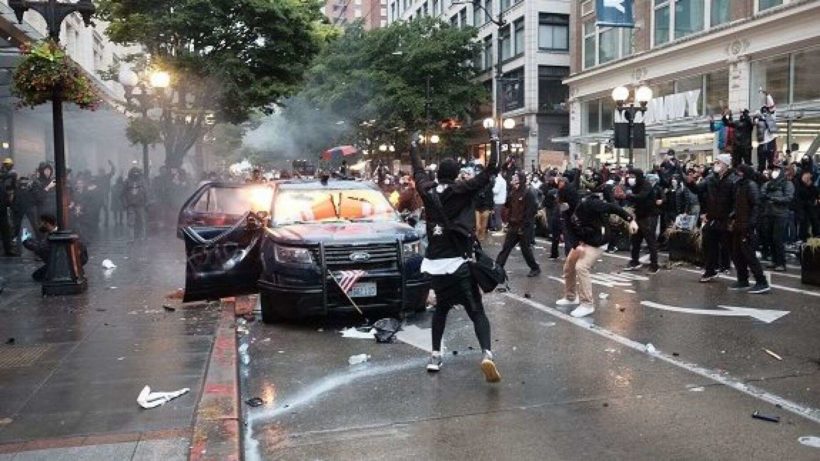 Photo shows suspect alleged to be Kelly Jackson at protest on May 30, 2020, with flaming police vehicle in background (U.S. Attorney’s Office Western District of Washington)

(Compiled from NY Post, Forbes and Business Insider) – Apple recently gave user data to the FBI that helped secure the arrest of a Black Lives Matter protester suspected of firebombing cop cars, according to a report.

The tech giant responded to a request from the feds for the iCloud information of the suspect, Kelly Jackson, by turning over his iPhone photos stored on Apple servers, Forbes reported.

Jackson, 20, was busted last week on charges for trying to set two police vehicles on fire during a May 30 protest in Seattle over the killing of George Floyd in Minneapolis, federal prosecutors said.

The FBI had been tipped off about the identity of a protester police believed had set fire to at least two police patrol vehicles during the May 30 protest.

Investigators checked the tip against surveillance feeds, news broadcast footage and social media images, deciding that the lead was worth chasing down.

Investigators then obtained a warrant to search his cell phone location data, provided by Verizon. The Verizon data showed the general location of Jackson’s phone when he made six calls on the day of the suspected firebombing, all of which placed him near the scene of the fire. It also revealed that Jackson was using an iPhone 7.

That’s when the FBI called on Apple, asking for the suspect’s iCloud information.

Apple disclosed the name, email, phone number, and residential address associated with Jackson’s account, then subsequently granted the FBI access to the contents of Jackson’s account in response to a court-ordered search warrant. 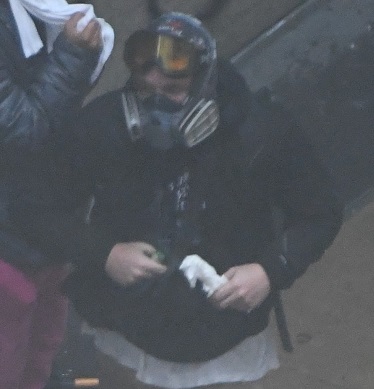 “Suspect at protest” in Seattle image from the Justice Dept press release, which notes: “The charges contained in the complaint are only allegations. A person is presumed innocent unless and until he or she is proven guilty beyond a reasonable doubt in a court of law.”

Once it had access to the iCloud account, the FBI found screenshots of an Instagram post promoting the protest, a screenshot of a recipe for a Molotov cocktail, and videos of “a green glass bottle” in an unzipped backpack, according to the criminal complaint. They also found photos in Jackson’s camera roll that appeared to show him wearing the same hoodie seen in surveillance footage.

Videos from the iCloud account showed a white male’s hands opening a black bag containing a green glass bottle with a gold cap, filled with liquid, the FBI wrote. And another showed a similar glass bottle being thrown into the open driver door of a cop car, setting it on fire. The individual who threw the bomb then celebrated his achievement in front of the camera, though the face was not visible, according to the FBI. His face was visible in an image taken later that day on the same phone and it appears he’s wearing the same sweatshirt as the person shown setting fire to the police vehicle, the agency added.

Jackson was arrested last week and charged with unlawful possession of a destructive device and arson. He hasn’t yet made a plea and his lawyer had not provided comment at the time of publication.

Apple, which also hadn’t responded to a request for comment, has handed over iCloud data on suspects in the vast majority of cases where the U.S. government has made a valid legal request. As the company’s transparency report for the second half of 2019 shows, it received 4,095 requests on Apple user accounts and returned information for 3,645 of those.

In 2019, Apple refused to help the government get into the physical iPhones of a Saudi national who shot and killed three Americans on a Pensacola, Florida, naval base in December 2019. (The FBI hacked into the terrorist’s phones anyway.)

The difference between Apple refusing to unlock the terrorist’s phones and this one is a matter of technology. While Apple has access to all users’ iCloud accounts, the company says there’s no “backdoor” that allows it to unlock a physical iPhone without knowing the password — meaning it can’t access files stored locally on the iPhone, or encrypted messages sent through iMessage. Apple has said that building a “backdoor” as requested by the FBI would compromise the security of all iPhone users.

Compiled from reports on Sept. 16 by Aaron Holmes at Business Insider, Thomas Brewster at Forbes and Jackie Salo, NY Post. Reprinted here for educational purposes only. May not be reproduced on other websites without permission.

2. What is the suspect, Kelly Jackson, accused of doing that led to his arrest?

3. Describe the series of events that led to Jackson’s arrest. (How did the FBI track him down?)

4. What do you think of the way the FBI was able to gather evidence to identify Kelly Jackson?

5. Apple and Verizon complied with court ordered search warrants. Civil liberties proponents are opposed to personal data being turned over to law enforcement in criminal investigations, saying it is an infringement on privacy and could lead to abuse of citizens’ rights by authorities. What do you think? Should authorities be able to obtain search warrants with probable cause to search devices the way they do to search a person’s house or office? Explain your answers.

6. What charges is the U.S. Attorney’s office bringing against Jackson?

7. How old is Jackson? How much time is he facing, if convicted?

8. U.S. Attorney Brian Moran said in a news release that the Justice Department is prosecuting “those who turn protected speech into violent criminal conduct.”
Raymond Duda, special agent in charge of the FBI Seattle office, said in the news release, “These individuals are hijacking legitimate First Amendment protected activity. By investigating this violent activity, the messages of peaceful protests have a better chance of being heard.”
a) What is your opinion of the local politicians (mayors, city councils, police chiefs) who allowed violent mobs to loot, burn and destroy their cities supposedly in the name of peaceful protest? (Many media reports note that protests are “mostly peaceful” during the day, but then turn violent as night falls.)
b) What preparations would you like your city or state to make to maintain law and order should a peaceful protest turn violent and destructive?
c) Ask a parent: What is your opinion of Antifa, contrasted with peaceful protesters? Do you think the peaceful protesters have been “hijacked” by those with violent intentions bent on causing chaos and destruction? Please explain your answer.

Kelly Thomas Jackson, 20, was arrested September 9 and was scheduled to appear in a federal courtroom in Seattle later in the day. He’s accused of tossing Molotov cocktails into one Seattle police car and at another.

The allegations are included in a 23-page complaint written by an FBI special agent assigned to investigate domestic terrorism.

In one instance, Jackson is accused of throwing a Molotov cocktail inside a patrol car, an unmarked 2017 Ford Explorer with emergency lights, police radios and other law enforcement equipment inside.

“After the bottle entered (the vehicle), flames spread rapidly, almost instantaneously, through the passenger compartment,” according to court papers. That vehicle was parked on Pine Street near Fifth Avenue.

Jackson is also accused of throwing a second Molotov cocktail at the windshield of another police vehicle, a 2016 Ford Explorer. It bounced off and exploded in flames on the sidewalk outside the downtown Seattle Nordstrom store.

“The U.S. Attorney’s Office continues to work closely with state, local and federal law enforcement to prosecute those who turn protected speech into violent criminal conduct,” U.S. Attorney Brian Moran said in a news release. “Not every criminal act will implicate a federal interest, but where there is federal jurisdiction we will use our tools to hold law-breakers accountable.”

“These individuals are hijacking legitimate First Amendment protected activity,” said Raymond Duda, special agent in charge of the FBI Seattle office, in the news release. “By investigating this violent activity, the messages of peaceful protests have a better chance of being heard.”

The complaint said the FBI has video of a white suspect in a gas mask, ski goggles and distinctive clothing using glass containers with a flammable material and a wick to burn or attempt to burn two police vehicles. Jackson was identified as a potential suspect after an anonymous tip to law enforcement.

As agents conducted surveillance on Jackson over the summer, they took a July 2 photograph of him outside a convenience store in what appears to be a sweatshirt with the same design and logo as the protester throwing the Molotov cocktails. The tipster also said the suspect stole a gas mask from his employer, a Mountlake Terrace plumbing company.

The case is being investigated by the FBI and the Bureau of Alcohol, Tobacco, Firearms and Explosives with assistance from the Seattle, Edmonds and Mountlake Terrace police departments.

(If convicted, Jackson faces up to 30 years in prison).

From a Sept. 9 article at Washingtons’ HeraldNet by Eric Stevick

“If it is possible, as much as depends on you, live peaceably with all people.”
“Depart from evil and do good; seek peace and pursue it.”