Amid surge, border agents are releasing migrants without court dates 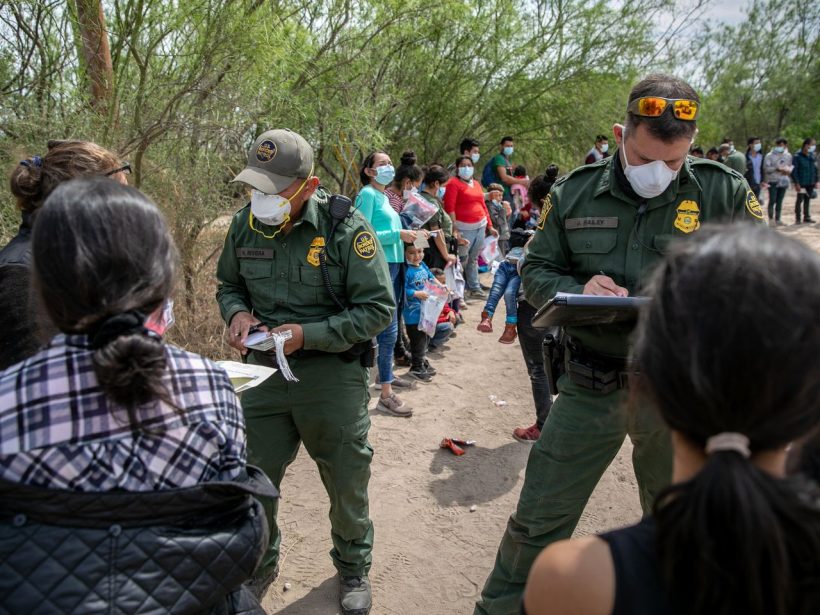 US Border Patrol agents question a group after they illegally entered the United States by crossing the Rio Grande into Texas on March 25, 2021, in Hidalgo, Texas. (Photo: John Moore/Getty Images)

(by Emily Jacobs, New York Post) — US authorities have been releasing illegal immigrant families without Notices to Appear in immigration court amid an overwhelming record surge in border crossings.

News of the new practice came last week, when Rep. Henry Cuellar (D-Texas) revealed that about 150 migrants were released in one weekend “without a notice to appear” in court.

“How do you release somebody to the country without a notice to appear?” he asked on Fox News, noting that those released were family units, not adults or unaccompanied children.

Releasing families swiftly eases the burden on the overcrowded facilities run by Customs and Border Protection, which has come under fire for holding children for longer than the legal 72-hour limit.

Releasing the migrants does not solve the problem, however, instead shifting the brunt of the work involved in processing to Immigration and Customs Enforcement (ICE).

The White House did not immediately respond to The Post’s request for comment on the report.

In a statement provided to The Post, CBP acknowledged that migrant family units were not being given court notices, saying, “The process for providing someone with a Notice to Appear (NTA) frequently takes hours, which contributed to overcrowding in some Border Patrol facilities.”

Addressing the problems caused by the time-saving measure, the statement added, “To reduce confusion, beginning on March 24, CBP included a notation on the form providing these individuals with a notice to report to an ICE office to commence their immigration proceedings.”

CBP emphasized that a background check is conducted, as well as biometric processing — which includes fingerprints and photos — and COVID testing and other services.

The Biden administration’s undoing of former President Donald Trump’s border policies has prompted a flood of Central American and Mexican illegal migrants at the US border, including thousands of unescorted children.

Central Americans looking for refuge from the Northern Triangle countries — El Salvador, Honduras and Guatemala — have taken these policy moves, as well as the overwhelmingly more welcoming tone from Democrats, as a sign that this president is inviting them to cross the border.

Insisting that the border was not facing a crisis, Homeland Security Secretary Alejandro Mayorkas said in early March that the problems the agency faced should be blamed on the previous administration.

The data, however, overwhelmingly shows that migrants were flooding the border because they believed Biden would welcome them with open arms.

Late last month, Mexican President Andrés Manuel López Obrador blamed the new president for the crisis, arguing that the “expectations” he set left migrants with the perception that they would be let into the US.

1. a) What revelation did Democratic Rep. Henry Cuellar of Texas make last week during an interview?
b) What did Rep. Cuellar specifically note about the releases?
c) Are you surprised that a Democratic congressman is sounding the alarm on the crisis created by President Biden’s policies? Explain your answer.
d) Do you agree with CBP ignoring standard procedure? Explain your answer.

2. a) For what reason does the reporter imply CBP (Customs and Border Protection) ignored procedure?
b) What statement did CBP make to the Post?

3. How does the CBP’s inaction affect ICE (Immigration and Customs Enforcement)?

4. a) How did the Biden administration respond to request for comment?
b) What has been the immediate result of President Biden’s reversal of President Trump’s border policies?

5. a) Alejandro Mayorkas, the Secretary of Homeland Security insisted in March that the border was not facing a crisis, and claimed that the problems the agency faced should be blamed on the previous (Trump) administration. Do you agree with Secretary Mayorkas?
b) What does the data show about why migrants are now flooding the border?

6. Do you think families will contact immigration without having been given a “Notice to Appear” in immigration court? Explain your answer.

7. It has been suggested that people entering the U.S. illegally should not only be fingerprinted, but also have a DNA test – especially as a way to protect the children by proving the people who say they are their parents truly are. Also, coyotes are known to use the same kids to get people into the country, and the kids are then sent back over the border to make the trip again with other “parents.”

NOTE: In 2013, the Supreme Court ruled that police can take DNA samples from anybody under arrest for any crime (but not yet convicted), regardless of whether DNA is relevant to their arrest. (The idea is to be able to connect people under arrest with other unsolved crimes in a national database using DNA.)

Do you think those crossing illegally should have a DNA test? Explain your answer.