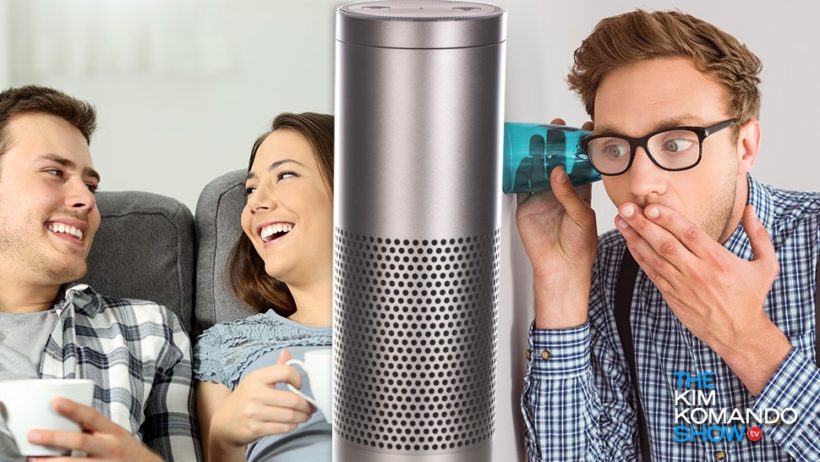 (Compiled from Bloomberg, CNBC and Fox News) – Amazon has thousands of workers around the world who listen to and review private Alexa conversations with the goal of helping improve the speech assistant’s technology, according to Bloomberg.

The report said the Amazon team transcribes the recordings and shares the conversations with other parts of the company in order to make Alexa’s “understanding of human speech” better.

Sometimes the employees can even hear chatter in the background while Alexa is on, but they are not authorized to speak about their work, Bloomberg reported.

The team is spread across different regions, including Boston, India, and Romania, Bloomberg said, and some of the workers review up to 1,000 audio clips per shift.

Amazon has never publicly disclosed the role of this group or the fact that human [eavesdropping] is part of Alexa’s voice technology.

An Amazon spokesperson [stated] that employees don’t have direct access to information that can identify the people speaking or the account that the snippet came from. However, Bloomberg reported that recordings are associated with account numbers, device serial numbers and the owner’s first name.

Occasionally the listeners pick up things Echo owners likely would rather stay private: a woman singing badly off key in the shower, say, or a child screaming for help. The teams use internal chat rooms to share files when they need help parsing a muddled word—or come across an amusing recording.

“We take the security and privacy of our customers’ personal information seriously,” an Amazon spokesman said in an emailed statement. “We only annotate an extremely small sample of Alexa voice recordings in order [to] improve the customer experience. For example, this information helps us train our speech recognition and natural language understanding systems, so Alexa can better understand your requests, and ensure the service works well for everyone.

We have strict technical and operational safeguards, and have a zero tolerance policy for the abuse of our system. Employees do not have direct access to information that can identify the person or account as part of this workflow. All information is treated with high confidentiality and we use multi-factor authentication to restrict access, service encryption and audits of our control environment to protect it.”

Amazon, in its marketing and privacy policy materials, doesn’t explicitly say humans are listening to recordings of some conversations picked up by Alexa. “We use your requests to Alexa to train our speech recognition and natural language understanding systems,” the company says in a list of frequently asked questions.

In Alexa’s privacy settings, Amazon gives users the option of disabling the use of their voice recordings for the development of new features. The company says people who opt out of that program might still have their recordings analyzed by hand over the regular course of the review process.

Alexa software is designed to continuously record snatches of audio, listening for a wake word. That’s “Alexa” by default, but people can change it to “Echo” or “computer.” When the wake word is detected, the light ring at the top of the Echo turns blue, indicating the device is recording and beaming a command to Amazon servers.

The Intercept reported earlier this year that employees of Amazon-owned Ring manually identify vehicles and people in videos captured by the company’s doorbell cameras, an effort to better train the software to do that work itself.

Apple’s Siri and Google Assistant also have human workers that listen to snippets of audio, but the companies reported to Bloomberg that the recordings aren’t linked to personally identifying information.

A recent Amazon job posting, seeking a quality assurance manager for Alexa Data Services in Bucharest, describes the role humans play: “Every day she [Alexa] listens to thousands of people talking to her about different topics and different languages, and she needs our help to make sense of it all.” The want ad continues: “This is big data handling like you’ve never seen it. We’re creating, labeling, curating and analyzing vast quantities of speech on a daily basis.”

Amazon’s review process for speech data begins when Alexa pulls a random, small sampling of customer voice recordings and sends the audio files to the far-flung employees and contractors, according to a person familiar with the program’s design.

Some Alexa reviewers are tasked with transcribing users’ commands, comparing the recordings to Alexa’s automated transcript, say, or annotating the interaction between user and machine. What did the person ask? Did Alexa provide an effective response?

Others note everything the speaker picks up, including background conversations—even when children are speaking. Sometimes listeners hear users discussing private details such as names or bank details; in such cases, they’re supposed to tick a dialog box denoting “critical data.” They then move on to the next audio file.

Amazon claims on its website that no audio is stored unless Echo detects the wake word or is activated by pressing a button. But sometimes Alexa appears to begin recording without any prompt at all, and the audio files start with a blaring television or unintelligible noise. Whether or not the activation is mistaken, the reviewers are required to transcribe it. One of the people said the auditors each transcribe as many as 100 recordings a day when Alexa receives no wake command or is triggered by accident.

In homes around the world, Echo owners frequently speculate about who might be listening, according to two of the reviewers. “Do you work for the NSA?” they ask. “Alexa, is someone else listening to us?”

Compiled from April 10 reports at Bloomberg News by by Matt Day, Giles Turner and Natalia Drozdiak, CNBC by Eugene Kim and Fox News by Brie Stimson. Reprinted here for educational purposes only. May not be reproduced on other websites without permission

1. Bloomberg News was the first to report that Amazon employs thousands of people to listen to voice recordings from Amazon Echo’s owners’ homes. Not just when the people are talking to Alexa: recordings are made of any conversations taking place in homes. How does Amazon explain this invasion of privacy:
a) For what reason does Amazon have employees listening to Echo owners’ conversations?
b) What do employees around the world do with the recordings?

2. In what locations are the Amazon employees who work on this until now secret project located?

3. What is the problem with this program as related to Alexa users’ trust in Amazon to ensure their privacy?

6. What is the problem with the opt out function users are given in Alexa’s privacy settings?

7. In addition to Amazon Echo, which other tech devices have human workers that identify people or listen to their conversations?

8. Bloomberg quoted Florian Schaub, a professor at the University of Michigan who has researched privacy issues related to smart speakers, who said, “You don’t necessarily think of another human listening to what you’re telling your smart speaker in the intimacy of your home. I think we’ve been conditioned to the [assumption] that these machines are just doing magic machine learning. But the fact is there is still manual processing involved. Whether that’s a privacy concern or not depends on how cautious Amazon and other companies are in what type of information they have manually annotated, and how they present that information to someone.”
a) Do you think Alexa, Ring, iPhone and Google Assistant owners should be concerned about their privacy? Explain your answer.
b) Ask a parent: would the information in this article affect your decision to purchase (or keep) any of these devices? Please explain your answer.
c) Should people trust big tech? Explain your answer.

NOTE TO STUDENTS: Anything you write, say, or post anywhere on the internet or any app never goes away. Don’t ever be ignorant of that fact. Don’t say or post anything you wouldn’t say in front of your grandmother or your boss. Seriously.