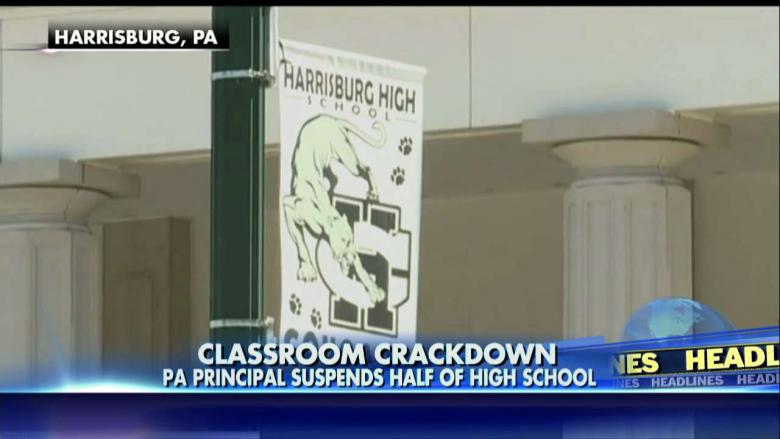 (by Christine Vendel, PennLive .com)  HARRISBURG, Pennsylvania–Nearly half the student population at Harrisburg High School [received] suspension notices [last] week because the students had too many unexcused absences.

School officials handed out suspension notices to 500 students last Monday, March 27, as part of a crackdown by the school’s new principal. About 1,100 students are enrolled at the school.

At least 100 of the students served one-day suspensions on Tuesday…. The disciplinary fates of the other students remain unknown as school officials continue to work with parents to confirm whether some of the absences were excused. School officials said many parents were able to provide documentation to clear up their students’ records.

School officials met with parents en masse after school Wednesday to explain the new expectations at the school, which has long struggled with poor test scores and a low graduation rate. …

The school’s tough stance against tardiness and unexcused absences was launched by the principal, Lisa Love, who said she could not improve academic achievement there if students don’t show up.

“The problem I’ve noticed here as principal is that students are coming to school but they are not going to classes when they get here,” said Love, who began leading the school at the end of January.

“Many parents send their kids to school and they’re thinking they’re going to class. I needed to reach out because of the enormous number not going to class.”

Instead of reporting to class, students congregate in hallways, restrooms, gymnasiums and other nooks and corners of the expansive school building, Love said.

Love said she needed to do something “radical” to get the attention of students, parents and the community.

“If you’re not in class, all you’re here to do then is to wreak havoc upon the school and disrupt the work that we are trying to do here,” she said. “And that’s to focus on student achievement.”

But at least one parent questioned the wisdom of preventing students from attending class as punishment for missing class.

“What does that teach them?” said Shanelle Franklin, whose daughter was threatened with suspension [for having too many unexcused absences]. “They’ve got senior projects to do.”

Assistant Principal Keith Edmonds said they drew the line for excessive absences for students who missed at least 35 classes in the last marking period without providing proper documentation. Each marking period covers 45 days, or nine weeks. The number of missed-classes that triggered the suspension notice amounts to a week’s worth of unexcused absences, since students have seven classes each day.

…School officials began notifying parents of the roughly 500 students that they would be serving a one-day suspension.  Word quickly spread, Edmonds said, and many parents hurried to the school to provide proper documentation for absences, avoiding the suspension penalty.

Going forward, students who continue to rack up unexcused absences may miss the prom or graduation ceremonies, Edmonds said. Students with more than 15 unexcused absences can’t go to the prom. Parents who are concerned about their child’s status should contact the high school before purchasing expensive items for the event, Love said.

Although the suspensions could be construed as “negative,” Love said she hoped to translated the situation into a positive by using the opportunity to connect with parents. She and other school officials also plan to meet parents by hosting meetings…next month.  [The school plans on working more closely with parents, and within the next month, plans on visiting neighborhoods and individual homes.]

“This was a hard decision for me to make,” Love said of the suspensions, “but I had to get the attention of the community to let them know that we are here. And we’re about to do some wonderful things for students and the community and we want this to be a school that everyone is proud of. And this was probably the eye opener we needed to make that happen.”

The school, whose standardized test scores and graduation rates are among the lowest in the state, needs “radical” change, Love said. It’s a feeling echoed by school district Superintendent Dr. Sybil Knight-Burney, and one of the reasons why Love was hired. Knight-Burney said the mass suspensions represented a “wake-up call” to the community.

“In order for us to get different results, we have to do something different,” she said. “We can’t do the same ol’ same ol’ and then complain about it when we’re getting the same ol’ results.”

Last year’s Keystone test scores showed 7.3 percent of Harrisburg High School students performed as proficient in biology; 11.7 percent in algebra and 28.8 in literature. The state averages for those subjects, meanwhile, were 64.5 percent, 59 percent and 72.89 percent.

The school’s graduation rate increased to 52.78 percent in 2015, but still fell short of the statewide average of 84.75.

Reprinted here for educational purposes only. May not be reproduced on other websites without permission from the PennLive .com.

Note: Watch the news clips under “Resources” below the questions.

3. For what reasons did new principal Lisa Love, who was just hired in January, take this measure? (What did she say about it?) Be specific.

4. a) What did Principal Love say about students who are not in class?
b) Do you agree with her assertion? Explain your answer.

5. a) What did one parent whose daughter had excessive unexcused absences say about the one day suspension?
b) What do you think of this parent’s argument?

6. How does Principal Love hope to translate the large number of suspensions into something positive?

7. a) Define proficient.
b) What are the student proficiency levels at Harrisburg High compared to state levels?
c) What is the schools graduation rate compared to the statewide average? (How many students graduate in 4 years?)
d) The principal is addressing the problem of students cutting classes and hanging around in school without going to class. Do you agree with her approach to solving this widespread problem? Explain your answer. (Can you think of a better solution?) Explain your answer.