(by Seth McLaughlin, WashingtonTimes.com) – Seeking to shut off federal aid going to foreign countries that “don’t like us,” a Texas Republican congressman said [last week] that lawmakers should vote separately on funding for every foreign nation receiving taxpayer money.

With foreign aid a major sticking point in the budget battles raging on Capitol Hill, Rep. Ted Poe proposed new House rules to hold country-by-country votes, saying it would end the current system where overall foreign aid levels are decided essentially in one fell swoop. He said splitting each country’s funding into its own bill will make members of Congress think more carefully about which countries deserve money, while adding transparency and accountability to the process.

“It changes House rules so members are able to vote on each country one at a time,” he said during a House Foreign Affairs Committee hearing that explored U.S. foreign assistance. “For every dollar handed out, we can ask, ‘How does this further the interest of the United States? If a country can justify that it is critical to U.S. interests, then it will pass. If not, then it won’t.”

After the November election, the push to reduce spending on foreign aid has gained steam on Capitol Hill. Many of the same tea party-backed lawmakers who helped Republicans seize control of the House are pressuring leaders to cut spending more than they’ve offered, and are skeptical of foreign aid and programs, which they suggest are often riddled with waste and fraud.

Democrats have fought back, saying foreign-aid spending saves money over the long haul. On Wednesday, they pointed to testimony from Gen. David H. Petreaus, who told lawmakers that funding the State Department and the U.S. Agency for International Development (USAID) will be key to the successful transition from combat to civilian forces after troops begin to leave Afghanistan, as is scheduled later this year.

“This category is really a national security funding issue, not just an issue of foreign assistance or some other element,” Gen. Petreaus told the House Armed Services Committee on Wednesday.

Foreign assistance totaled $39.4 billion in 2010, or about 1 percent of the total federal spending. …

USAID and the State Department, as the primary administrators of U.S. foreign assistance, doled out $10.38 billion in security-related assistance; $10.93 billion for health, education, and social welfare programs; $3.64 billion for governance programs; $5.21 billion for economic growth activities; and $4.98 billion in humanitarian assistance. Afghanistan, Israel, Pakistan, Egypt and Haiti were the top recipients.

Rep. Donald A. Manzullo [expressed] frustration [with] USAID Administrator Dr. Rajiv Shah, [asking] why the agency had awarded a New York City-based company a $100,000 grant to develop a fuel-cell-powered “E-Bike.”

“Why is the U.S. taxpayer buying a solar-powered bicycle? How is that going to help out the world?” the Illinois Republican [questioned], interrupting Mr. Shah’s explanation that the grants were designed to provide seed money for businesses to develop new technologies. “Don’t use the word investment, use the word spent or paid! … This is a waste of taxpayer dollars and the sooner you guys wake up and understand that, the better off you are going to be in taking limited resources and using them for a better purpose.”

The exchange came during a House Foreign Affairs Committee hearing where Mr. Shah and Daniel Y. Yohannes of the Millennium Challenge Corporation (MCC) testified about President Obama’s 2012 budget request to raise funding for the State Department, USAID and other international programs from $49.3 billion to $50.9 billion.

The two men said the spending proposals offered by Republicans would be “devastating” to their efforts abroad. Under the House proposal for this fiscal year, USAID would lose $120.9 million and MCC would lose $315 million compared with 2010, according to data from the House Appropriations Committee.

Democrats on the panel defended the president’s plan, saying the upfront investment helps avoid steeper costs over the long haul.

Mr. Poe floated his proposal at the end of the hearing, pointing out that Venezuela, Cuba, China and Russia are receiving some foreign assistance.

NOTE: This article was published at washingtontimes.com on March 16, 2011.

1. What change is Texas Republican Congressman Ted Poe proposing to make to the House rules on how foreign aid is determined?

2. Why does the congressman say his proposed rule change is necessary? (How will it improve U.S. procedure for distributing foreign aid?)

3. Why are the (mainly Republican) congressmen opposed to the current process used to decide on foreign aid?

4. How are Democratic congressmen defending the amount of foreign aid given to countries around the world?

6. a) Which five countries received the most aid from the U.S. in 2010?
b) Which four countries that are known to strongly dislike America are also given aid?

7. Watch an interview with Rep. Poe on U.S. foreign aid at at video.foxnews.com/v/4595558/time-to-target-foreign-aid.
Look at the map under “Background” below which shows countries (in red) receiving U.S. aid.
Do you agree with Congressman Poe’s proposal to require the House to vote on financial aid to each of the 151 countries the U.S. gives money to individually? Explain your answer.

8. Ask a parent to review the amount of foreign aid given by Americans through our tax dollars per year, and if he/she supports our aid around the world, and to explain his/her answer.

OPTIONAL: Contact your representative and ask how he/she stands on Congressman Poe’s proposal to change the House rules to hold country-by-country votes on how much, if any, foreign aid is given to each country each year. State your support for, or opposition to, Rep. Poe’s proposal. Remember to be clear, concise and polite.  To contact your representative, go to House.gov.

For the first hundred years of the United States’ existence as a country, government aid was practically nonexistent. It was generally considered that the Constitution did not authorize the government to use the people’s money for foreign charity. There was, however, …private aid from charitable foundations and religious organizations. Missionary societies, for instance, operated schools in Africa and other areas…

[Since World War I the] United States [has given] foreign aid…to other countries. [The money we give] can be divided into two broad categories: military and economic assistance.

It is given by the United States government…to a variety of recipients, including:

The government channels about half of its economic assistance through a specialized agency, the United States Agency for International Development (USAID).  [USAID’s stated goals include providing “economic, development and humanitarian assistance around the world in support of the foreign policy goals of the United States.”]

In fiscal year 2009, the U.S. government allocated the following amounts for aid:

A map of countires that receive aid from the U.S.:
(From: poe.house.gov) 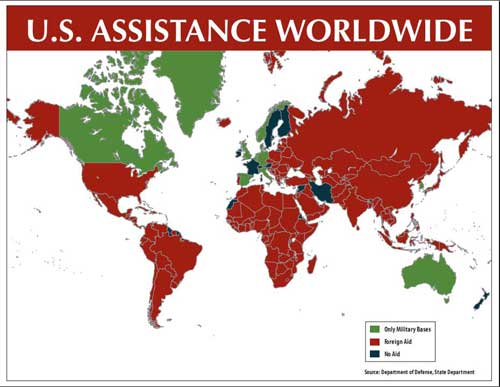