AG to end ‘catch and release’ detention for some migrants 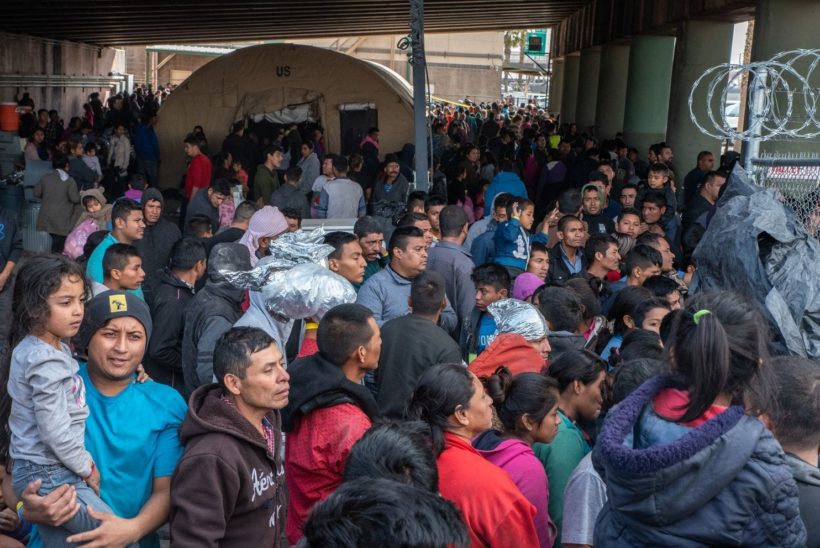 Migrants gather inside the fence of a makeshift detention center on March 27 in El Paso, where a surge has been overwhelming Border Patrol and the U.S. immigration infrastructure. (Sergio Flores for The Washington Post)
The New York Times reported in March 2019:
"Border at ‘Breaking Point’ as More Than 76,000 Unauthorized Migrants Cross in a Month"

(by Mica Rosenberg and Kristina Cooke,(Reuters)  NEW YORK/SAN FRANCISCO – The U.S. Attorney General on Tuesday struck down a rule that had allowed some asylum seekers to ask for bond in front of an immigration judge…. [Attorney General Bill Barr  implemented a new ruling requiring that individuals seeking asylum in the United States be held in detention facilities until their court date. Essentially, Barr is ending catch-and-release of those claiming asylum. ]

The first immigration court ruling from President Donald Trump’s newly appointed Attorney General Barr is in keeping with the administration’s moves to [close the loopholes in] the asylum process as tens of thousands of mostly Central Americans cross into the United States asking for refuge.  U.S. immigration courts are overseen by the Justice Department and the Attorney General can rule in cases to set legal precedent.

Barr’s ruling is the latest instance of the Trump administration taking a hard line on [illegal] immigration. This year the administration implemented a policy to return some asylum seekers to Mexico while their cases work their way through backlogged courts, a policy which has been challenged with a lawsuit. …

Barr’s decision applies to migrants who crossed illegally into the United States.

Typically, those migrants are placed in “expedited removal” proceedings – a faster form of deportation reserved for people who illegally entered the country within the last two weeks and are detained within 100 miles of a land border. Migrants who present themselves at ports of entry and ask for asylum are not eligible for bond.

But before Barr’s ruling, those who had crossed the border between official entry points and asked for asylum were eligible for bond, once they had proven to asylum officers they had a credible fear of persecution.

“I conclude that such aliens remain ineligible for bond, whether they are arriving at the border or are apprehended in the United States,” Barr wrote.

Barr said [people claiming asylum] can be held in immigration detention until their cases conclude, or if the Department of Homeland Security (DHS) decides to release them by granting them “parole.” DHS has the discretion to parole people who are not eligible for bond and frequently does so due to insufficient detention space or other humanitarian reasons.

Barr said he was delaying the effective date by 90 days “so that DHS may conduct the necessary operational planning for additional detention and parole decisions.”

…The decision will have no impact on unaccompanied migrant children, who are exempt from expedited removal [and can be held for no more than 20 days]. Most families are also paroled because of a lack of facilities to hold parents and children together.

Michael Tan, from the American Civil Liberties Union, said the rights group intended to sue the Trump administration over the decision, and immigrant advocates decried the decision.

Barr’s decision came after former Attorney General Jeff Sessions decided to review the case in October. Sessions resigned from his position in November, leaving the case to Barr to decide.

Published at Reuters .com. Reprinted here for educational purposes only. May not be reproduced on other websites without permission from Thomson Reuters.

The New York Times reported in March 2019:
“Border at ‘Breaking Point’ as More Than 76,000 Unauthorized Migrants Cross in a Month”

2. To whom does the new ruling apply?

3. Who is exempt from this ruling?

4. a) When will the ruling take effect?
b) Why the delay?

5. Read the “Background” under the questions. President Trump has said that migrants traveling to the U.S. are coached on the right things to say to be considered an eligible asylum seeker.
a) Do you think people trying to get to the U.S. would make false claims to gain permanent entry into the U.S.?
b) How might such a huge number of people falsely claiming asylum harm people who actually need asylum?

As a reminder, the vast majority of asylum claims are thrown out and “credible fear” or “reasonable fear” statements are fraudulently used to gain access to the United States. A reminder from the White House:

Currently, the asylum backlog sits at nearly 500,000 cases with an additional 348,000 individuals waiting in the immigration court system.