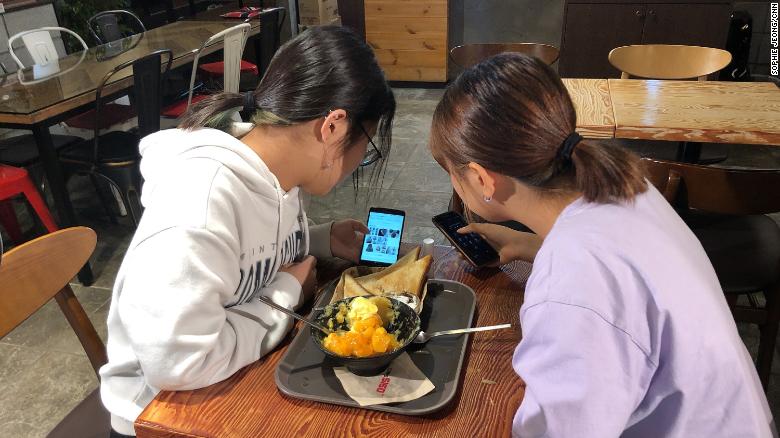 Yoo Chae-rin (left) shows photos to her friend Kim Hyo-min (right) in a coffee shop near Seoul in September 2019.

(by Sophie Jeong, CNN) – It was 4 a.m. when 16-year-old Yoo Chae-rin realized she had been on her phone for 13 hours. In less than three hours, she had to be up for school.

The South Korean high school student knew she had a problem, so she enrolled in a government-run camp for teenagers who can’t put their phones down.

“Even when I knew in my head I should stop using my smartphone, I just kept going,” Yoo said. “I couldn’t stop, so I’d be on it until dawn.”

South Korea has one of the highest ownership of smartphones in the world. More than 98% of South Korean teens used one in 2018, according to government figures — and many are showing signs of addiction.

Last year, around 30% of South Korean children aged 10 to 19 were classed as “overdependent” on their phones, according to the Ministry of Science and Information and Communications Technology (MSIT). That means they experienced “serious consequences” due to their smartphone use, including a decline in self-control.

It’s those children — like Yoo — who qualify for a place on government-run camps to treat internet addiction. The program started in 2007 and expanded in 2015 to include smartphones.

This year, South Korea’s Ministry of Gender Equality and Family held 16 camps across the country for about 400 middle and high school students. For some parents, it was a last resort.

“I think they send kids here because of their desperate desire to get an expert’s help,” said Yoo Soon-duk, Director of Gyeonggi-do Youth Counseling & Welfare Center, which runs a camp for teens in the northern Gyeonggi province.

Yoo had been an average student in middle school, but by high school she had sunk to the bottom of the class. She would stay up late, scrolling through her Facebook feed, playing with South Korean camera app Snow and talking with friends on instant messaging service KakaoTalk.

“I felt like my sense of reality was fading,” said Yoo. “Even when I had a fun and productive day (with my friends), it felt like a dream.”

Her father, Yoo Jae-ho, became increasingly worried about her. “There wasn’t much conversation among the family,” he said. “If I talked to her about her phone, there would be an argument.”

He set a time limit of two hours a day for smartphone use, but his daughter still found ways to get around it.

It was Yoo Chae-rin’s idea to join the camp in July. At the gate, she handed in her phone for the first time in years and started a 12-day detox.

South Korean internet addiction camps are free, aside for a 100,000 won ($84) fee for food. Boys and girls are sent to separate camps, and each caters for around 25 students.

At camp, the teenagers are encouraged to participate in scavenger hunts, arts and crafts activities, and sports events. They also have to attend compulsory one-on-one, group and family counseling sessions to discuss their phone usage. Then, for 30 minutes before sleep, the campers meditate.

Many of the camps are held in youth training centers, away from the city, in green, leafy settings to help the young addicts switch off. Yoo’s camp was held in the city of Cheonan at the National Youth Center of Korea, which has an indoor swimming pool and sports ground.

Camp director Yoo Soon-duk said for the first few days the teenagers have an “agonized look” on their faces. “From the third day, you can see how they change,” she said. “They (start to) enjoy hanging out with friends.”

…While this camp is for teenagers, there are separate camps for elementary students, and the National Center for Youth Internet Addiction Treatment offers programs during the semester.

South Korea is not the only country where teenagers are hooked on phones — worries are growing about excessive smartphone use worldwide.

Published at CNN .com. Reprinted here for educational purposes only. May not be reproduced on other websites without permission from CNN.

2. a) Define overdependent.
b) What behaviors did the teens display that put them into that category?

3. Describe Yoo Chae-rin’s experience that led her to ask to go the the detox camp.

4. What did Yoo’s father do when he realized she had a problem with her phone?

5. a) Define detox.
b) Who runs the detox camps in South Korea?
c) What do teens do during their 12 day stay?

6. Today’s Daily News Article is a human interest news story. The major news articles of the day tell of important happenings. Human interest stories tell of how those happenings have impacted the people or places around the story. These stories take a break from the more serious news material to highlight something light or funny, something unusual and often something inspiring.
a) Do you think this human interest story is newsworthy? Why or why not?
b) How does it inspire or encourage you?

More from the CNN article above:

The South Korea government hopes that treating addiction early can prevent problems in the future.

“Later, when (these adolescents) grow up and have a hard time performing their social roles, not only is there a damage to an individual, but also the nation’s resources will be spent in order to support them. It’ll be a double loss,” said Kim Seong-byeok, the chief of the department that oversees the camps at the Ministry of Gender Equality and Family.

One month after the camp, Yoo said she only uses her phone for two to three hours a day, compared to around six to seven hours before.

“Before, even if I thought in my head that I should stop, I couldn’t,” she said. “But now, if I want to stop, I’m able to stop right away.”

However, Yoo is not sure how effective the detox was for her fellow campers. “I had two roommates. As soon as the camp was over, one (of them) didn’t even say bye to me properly and ran out to use her smartphone,” she said.

According to psychiatrist Dr. Lee Jae-won, the camp’s long term benefits depend on how willing the teenagers are to change their habits. Those who still can’t control their need to use smartphones after the camp may need to seek medical help, he said.

Yoo said friends who went willingly to camp had noticed an improvement in their phone habits. However, she couldn’t say the same for those who fought the process.

“For friends who were forced to go because of their parents, I think the camp wasn’t that effective for them.”