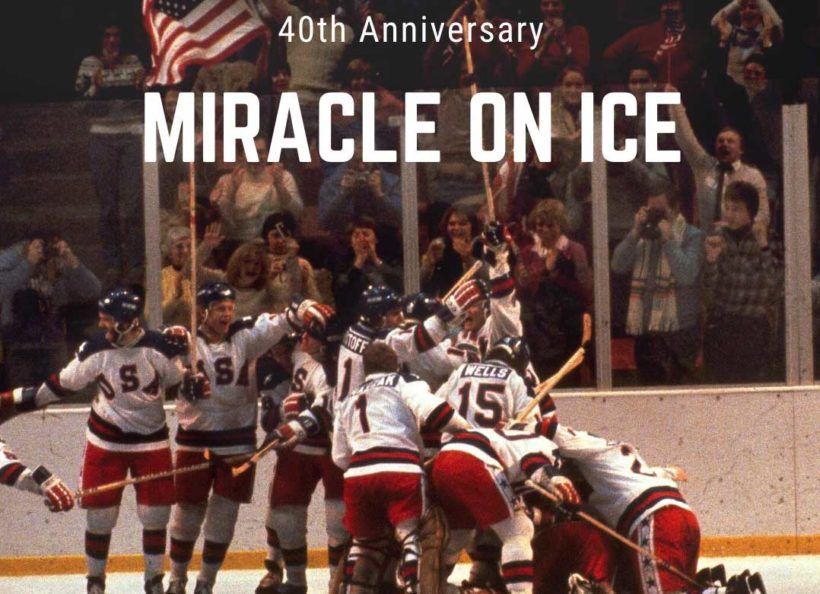 Going into the 1980 Winter Olympics, the Soviet Union had won the gold medal in five of the six previous Winter Olympic Games, and they were the favorites to win once more in Lake Placid. The team consisted primarily of professional players with significant experience in international play. By contrast, the United States’ team—led by head coach Herb Brooks— comprised mostly amateur players. With only four players with minimal minor-league experience, the United States was the youngest team in the tournament and in U.S. national team history.

This year, on the 40th anniversary of the U.S. victory over the Soviets, nearly the entire 1980 US Olympic hockey team reunited in Las Vegas as part of a weekend-long celebration.

LAKE PLACID, N.Y. – On Feb. 22, 1980, the United States Olympic hockey team upset the U.S.S.R. 4-3 in what is considered the greatest upset in team sports. [On that day, 20 amateur hockey players stepped foot on Olympic ice and beat the juggernaut that was the Soviet Union hockey team].

[In 2015 on the 35th anniversary], the team reunited at Herb Brooks Arena in Lake Placid, N.Y. where the 1980 Olympic hockey games took place.

The ovation wasn’t quite as deafening as it was 35 years ago. It was riveting, nonetheless, for Dave Christian and his old Olympic buddies, together again to celebrate their Miracle on Ice.

“It feels exactly the same,” Christian said Saturday night as the members of the 1980 U.S. Olympic hockey team returned to the rink they made famous with their triumph over the Soviet Union. “You could feel the electricity in the (locker) room. It’s still there.”

The “Relive the Miracle” reunion at Herb Brooks Arena attracted more than 5,000 fans for a two-hour celebration of one of the most memorable upsets in sports history. Every surviving player from the team made the trip, including Mark Pavelich, who drove from his Oregon home with two dogs. It was the first time the team had all been together since that memorable night.

Missing was Herb Brooks, the Hall of Fame coach who was killed in a car accident in 2003, and rugged defenseman Bob Suter, who died of a heart attack at age 57 in September.

“Herb had a feel for the game during the game,” goalie Jim Craig said. “He would get you off the ice before you could commit a penalty. He was ahead of his time in many ways.”

“Bobby was a great player and a great person,” said 60-year-old Mike Eruzione, who scored the game-winner against the Soviet Union in the medal round. “He did a lot for hockey. We all realize that at some point we’re going to move on, but nobody thought that Bobby would not be with us. He was a special teammate, a special person.”

Suter had dedicated much of his later life helping kids learn the game as a youth hockey coach back in his hometown of Madison, Wisconsin.

“Everyone felt a big loss,” Mark Johnson said. “Everyone on the team had a role. Bobby was a character in and out of the locker room. He’s dearly missed. His legacy will live on in Wisconsin.”

The U.S. took the lead on Friday, Feb. 22, 1980, against the powerful Soviets on Eruzione’s goal midway through the third period. It was the last goal of the game as Craig stood tall in net.

The Americans finished the 4-3 upset to the sound of broadcaster Al Michaels’ call of, “Do you believe in miracles?” Two days later, the U.S. rallied to beat Finland 4-2 for the gold in a game the Americans had to win just to medal.

“In sports in general, everyone roots for the underdog, which we certainly were an underdog,” Christian said Saturday afternoon at a press conference. “We were aware of the political situation in the world, but in a lot of respects for us it truly was a game, a great challenge.

“We were up against what at that time was considered one of the best teams that had been put together,” he said. “So in that respect it was just a game. I think it gave people the sense of feeling good. You can’t help but smile.”

For Eruzione, who works in alumni relations at Boston University, his winning goal and the team’s improbable gold medal changed his life. He said he deals “with it so often it’s hard to believe it’s been 35 years” because every week he’s doing something or going somewhere that’s associated with 1980.

“The real story for me was they only scored three goals,” Eruzione said. “Throughout the tournament, they were scoring seven, eight, nine goals a game. Not only was Jimmy (Craig) solid, actually, the defense and the defensemen were outstanding in that game.”

When the U.S. won the gold, it was a time of world strife. The Soviet army had just invaded Afghanistan as the Cold War simmered, a group of Americans was being held hostage in Iran, the U.S. economy was in bad shape, and President Jimmy Carter already had announced a U.S. boycott of the Summer Olympics in Moscow.

“I’ve played on a lot of teams, and this is the best team, the closest team I ever played on,” Neal Broten said. “As a younger guy, I looked up to all these guys. It was a privilege and honor for me to represent our country with these guys and do what we did.” 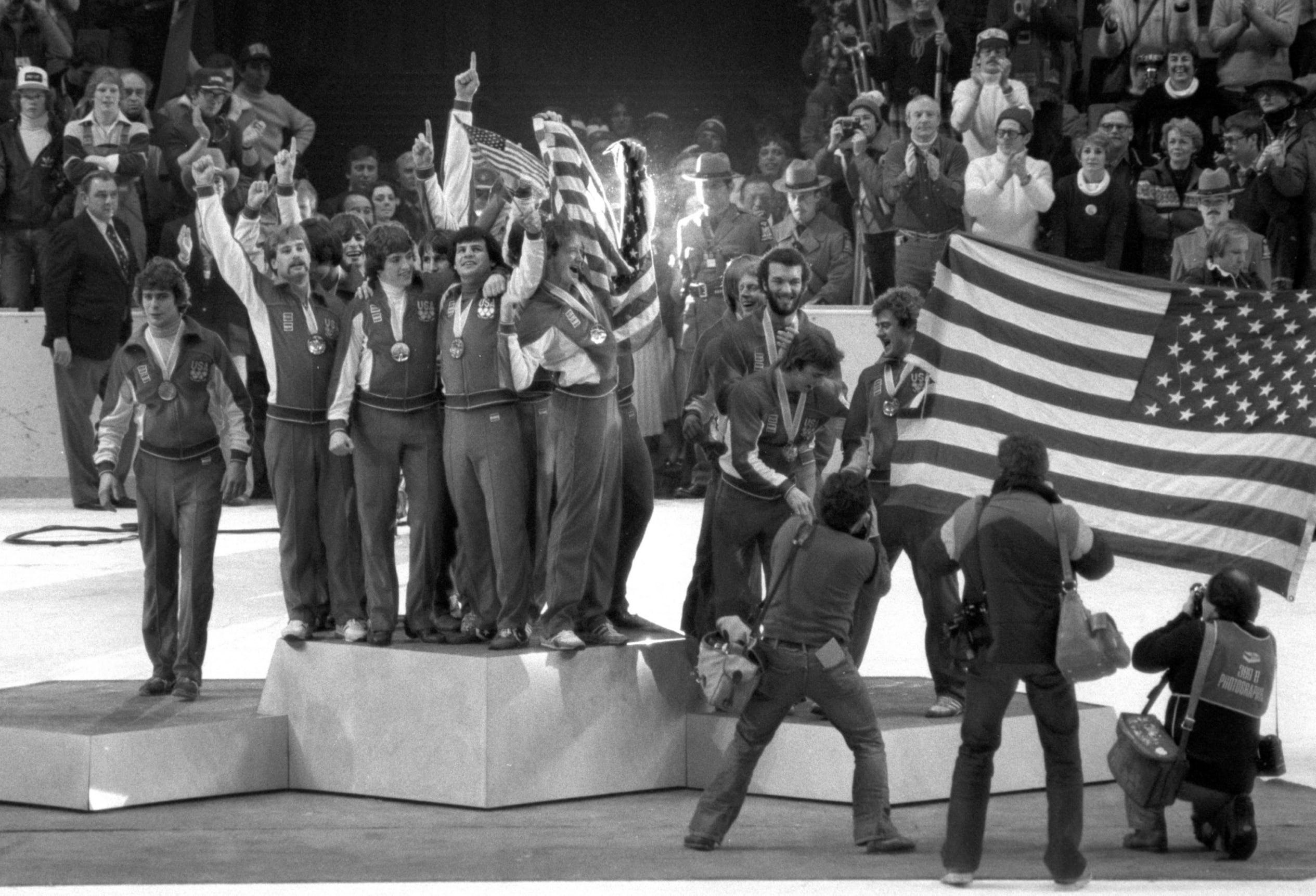 [ESPN reported: The USSR had won all 12 matchups with the U.S. between the 1960 and 1980 Olympics, outscoring the Americans 117-26. Even when the U.S. had NHL players playing for it in the 1976 Canada Cup, it lost to the Soviets twice (outscored 9-2). …That doesn’t even include the Soviets’ infamous 10-3 blowout exhibition win to close out the 1980 U.S. team’s pre-Olympic tour at Madison Square Garden, just one week before the Olympic Games began.

Wikipedia reports: In exhibition games in 1980, Soviet club teams went 5–3–1 against NHL teams and, a year earlier, the Soviet national team had routed the NHL All-Stars 6–0 to win the Challenge Cup. In 1979–80, virtually all the top North American players were Canadians, although the number of U.S.-born professional players had been on the rise throughout the 1970s.].

First published at cbsnews .com on Feb. 22, 2015.  Reprinted here for educational purposes only. May not be reproduced on other websites without permission from CBSNews.

2. Why was the American victory over the Soviet team “a miracle”?

3. How do you know from this article that U.S. goalie Jim Craig played a great game?

5. The U.S. and since-collapsed Soviet Union were at odds in 1980. Russian Olympic competitors were full-time athletes whereas the U.S. team was made up of college players and long-shot pro aspirants like Eruzione and Buzz Schneider. They defeated a Russian program that had dominated the Olympics since 1964. The U.S. team beat a Russian team that had seven players from the 1976 Olympic team and one player who had played in three other Olympiads. Mike Eruzione said, “The real story for me was they only scored three goals. Throughout the tournament, they were scoring seven, eight, nine goals a game. Not only was Jimmy (Craig) solid, actually, the defense and the defensemen were outstanding in that game.”

a) How does the story of the U.S. Olympic hockey team inspire you?
b) Ask a grandparent if he/she remembers this victory.

The Americans’ stunning 4-3 victory over the Soviet Union becomes even more remarkable under closer examination. The fact that the US was able to stay in the game at all was a miracle in itself. Here’s a look at how the US pulled off this remarkable victory:

The Russians rarely would dump the puck in, so every time they tried to stickhandle into the zone, there were three Americans to meet them. That made for fewer shots on Craig and helped lead to more turnovers in the defensive zone that allowed the US transition to break out with some speed up the ice.

The back checking and the discipline from the Americans was just outstanding throughout the third period.

The Americans then had 10 minutes to keep the Soviets off the board after Eruzione scored. Again, they maintained a defense that frustrated the skillful Russians. Their chances, which were so plentiful early in the game, were few and far between in the third.  (Excertped from a 2015 CBS Sports report)

Here’s a look at some of the more interesting facts and figures from the game, the team and the tournament as a whole …

33-15: Team USA’s aggregate score in seven games. While the American kids were mostly college guys or low-minor leaguers, they could play. They went undefeated in the tournament and outscored their opponents by 18 goals. Even if the USSR was the best club on paper, the US was No. 2 — though bronze-medalist Sweden could have been in the discussion, too.

63-18: USSR’s aggregate score in seven games. So yeah, they were pretty good. The only loss they suffered in the tournament came against Team USA.

11: Points by Mark Johnson to lead Team USA at the 1980 Olympics. In the season-long buildup to the tournament, Johnson had 92 points during Team USA’s 60-game exhibition schedule.

.924: Jim Craig’s save percentage in seven appearances at the Olympics. He played every minute for the US in the tournament and put together one of the most impressive Olympic performances in history. With the benefit of an NHL defense in front of him and modern equipment, Ryan Miller suprassed Craig’s save percentage with a .946 mark in 2010.

.840: Vladislav Tretiak’s save percentage in four appearances in 1980. Then 27, it was Tretiak’s worst Olympic performance in four Winter Games. He had backstopped the Soviets to two gold medals at the Olympics before 1980 with a .928 save percentage in 1972 and .943 mark in 1976. In winning gold again in 1984, at age 31, Tretiak was a machine. He allowed just four goals in six starts, while posting a .966 save percentage. The Americans caught him at just the right time, apparently.

19: Age of Mike Ramsey, Team USA’s youngest player at the Olympics. Despite his youth, Ramsey was on the ice at both the start of the Miracle on Ice and the end along with defensive partner Ken Morrow. Both would go on to impressive NHL careers.

2: Gold medals won in Olympic ice hockey by the father and son duo of Bill and Dave Christian. Bill was a member of the first American squad to win gold in Squaw Valley, Calif., in 1960. Twenty years later, Dave won in Lake Placid. Though he might not get an Olympic shot, New York Islanders forward Brock Nelson is Bill Christian’s grandson, so there’s a chance to continue the family tradition.

5,948: NHL games played by members of the 1980 US Olympic team. Thirteen of the 20 players made it to the NHL. Neal Broten at 1,099 career games had the longest career, while Mike Ramsey is right behind him at 1,070 games. Miracle on Ice star Mike Eruzione never played in the NHL, while goaltender Jim Craig saw action in only 30 games in the big leagues. Mark Johnson had a successful run as he scored 508 points in 669 games.

5: Total Stanley Cup titles won by members of the Miracle on Ice squad. Four of them belong to Ken Morrow, who immediately joined the New York Islanders for the remainder of the 1979-80 season after winning gold. The Islanders won the Cup that year and three more consecutively after that. Neal Broten is the other Miracle man to hoist the Stanley Cup, which he did with the New Jersey Devils in 1995.

6: Hockey Hall of Famers that played in the 1980 Olympics. Three members of the Soviet team have been elected to the Hockey Hall of Fame — goalie Vladislav Tretiak, defenseman Viacheslav Fetisov and forward Valeri Kharlamov. Canada’s Glenn Anderson, Finland’s Jari Kurri and Czechoslovakia’s Peter Stastny also have been inducted. 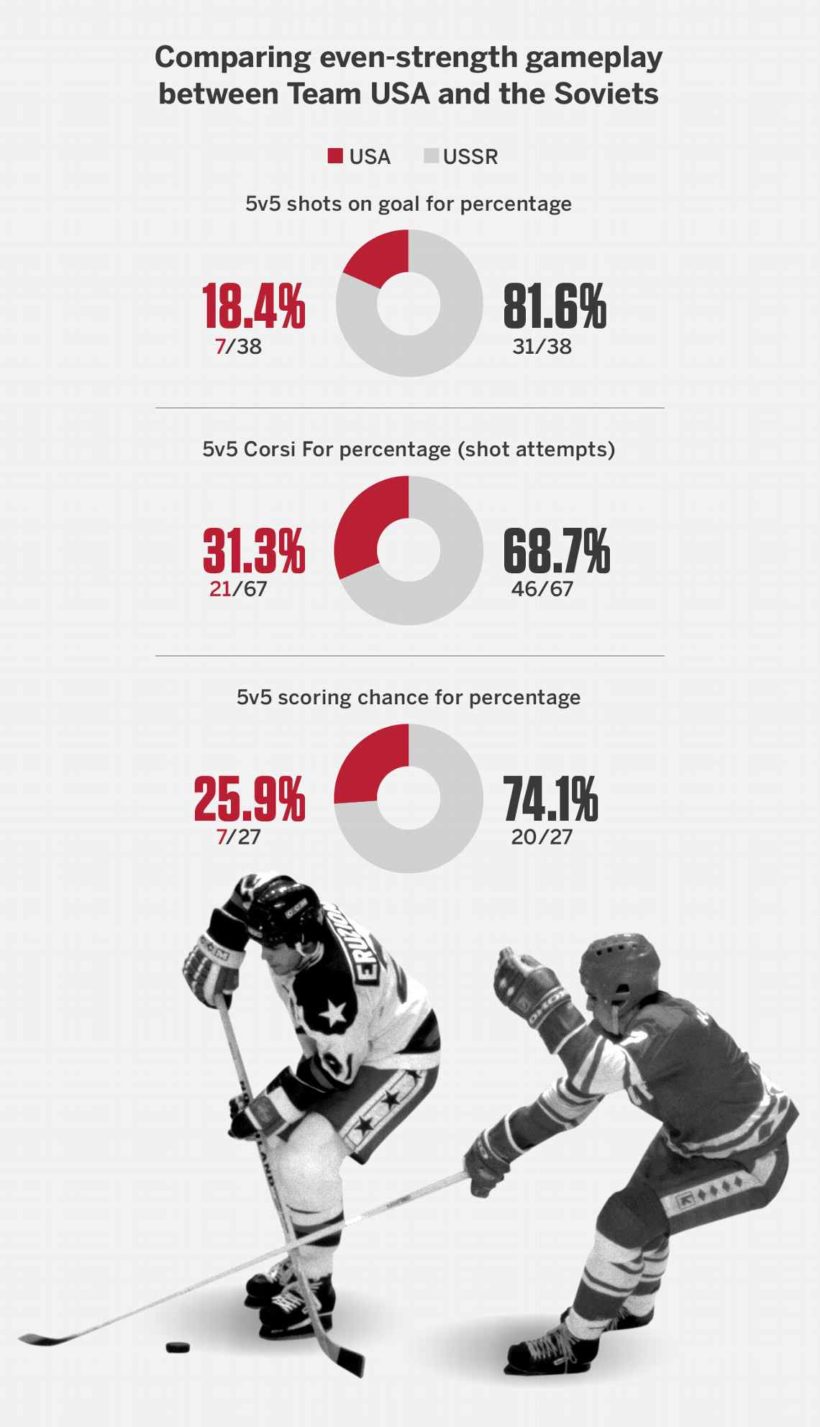