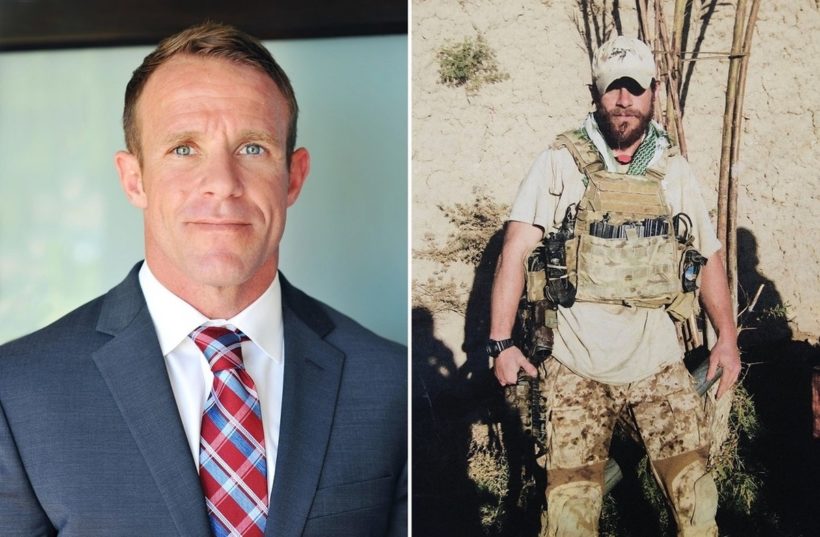 (from American Military News, March 29) – Congressmen Duncan Hunter and Ralph Norman, along with 38 other members of Congress, have sent a letter to the U.S. Navy asking for accused Navy SEAL Chief Eddie Gallagher to be released from pre-trial confinement.

In the letter, which has been reviewed by American Military News, the Congress members ask Rear Adm. Yancy Lindsey, who is Commander of Navy Region Southwest, to review Gallagher’s pre-trial confinement conditions.

Gallagher has been jailed for more than seven months, since Sept. 11, 2018, ahead of his trial in May. His family says he is being mistreated while being kept at Naval Consolidated Brig Miramar in San Diego, including insufficient access to legal counsel and medical care.

“We are respectfully requesting that you re-evaluate the decision to place Chief Gallagher in pre-trial confinement and analyze whether a less severe form of restraint would be appropriate as his trial approaches,” the letter says. “Ultimately, our goal is to ensure that Chief Gallagher is given a fair trial and the opportunity to prepare for his defense.”

“We ask that you weigh this decision given the terrible message Chief Gallagher’s confinement sends to our war fighters, that they can be confined behind bars away from their family, legal defense, and community for nine months before their day in court,” it adds. “To confine any service member for that duration of time, regardless of the authority to do so, sends a chilling message to those who fight for our freedoms. This is why, as Members of Congress, we are urging you to act quickly to re-evaluate Chief Gallagher’s confinement and take the actions necessary to ensure he is given the best opportunity to prepare his defense for a fair trial.”

Congressmen Hunter and Norman held a press conference about the letter with the Gallagher family on Thursday in Washington, D.C.

“What is happening to Chief Gallagher is nothing short of a tragedy,” Hunter told American Military News. “No American hero deserves the type of treatment Eddie has been forced to endure, and I am personally committed to him and his wife Andrea that we are going to make every effort, ask every question and contact any authority, including the President of the United States, to ensure that Eddie receives a fair trial and that his Constitutional right of presumption of innocence is protected.”

Andrea Gallagher, Eddie Gallagher’s wife, told American Military News, “Our family is grateful for the support of the over 40 members of Congress who have called on the Navy to release Eddie from pre-trial confinement. It is insane we need 40 members of Congress to request something that is a Constitutional right – that Eddie be able to properly prepare for trial, receive medical treatment and see his family.

“The abhorrent treatment of Eddie is a stain on the military and its leadership for allowing this to happen, and we’re grateful for members of Congress for holding them to account,” she added.

“I’m confident Navy SEAL Eddie Gallagher will soon have a fair trial,” Norman tweeted. “Until then, I question whether highly restrictive pre-trial confinement is warranted for a decorated soldier who is still presumed innocent, or if a less restrictive form of custody is more appropriate.”

“I joined @RepRalphNorman and the Gallagher family in demanding answers regarding the treatment of Chief Petty Officer (SEAL) Eddie Gallagher. It’s outrageous that a decorated Navy SEAL is being treated this way by his own government,” Hunter tweeted.

Gallagher is charged with premeditated murder of an already fatally wounded ISIS prisoner in Mosul, Iraq, during his last deployment in 2017, allegedly stabbing the prisoner with a hunting knife. He also faces other charges, including aggravated assault with a dangerous weapon and obstruction of justice.

Other service members who face charges under the Uniform Code of Military Justice are not being held in the brig, including two other Navy SEALs who are charged with strangling a Green Beret in Mali.

Published at AmericanMilitaryNews .com. Reprinted here for educational purposes only. May not be reproduced on other websites without permission from American Military News.

2. How do they explain the reasons for their request?

3. a) When was Chief Gallagher jailed?
b) When is his trial?

4. With what crimes is Chief Gallagher charged?

5. From Wikipedia: The Uniform Code of Military Justice (UCMJ is the foundation of military law in the United States. It was established by the United States Congress in accordance with the authority given by the Constitution in Article I, Section 8, which provides that “The Congress shall have Power….To make Rules for the Government and Regulation of the land and naval forces.”

What is of note about other service members who are facing charges under the Uniform Code of Military Justice?

6. The Navy has not given a reason for Gallagher’s extreme treatment. His family and the Congressmen said they are not asking for any special favors, but rather just and equal treatment while he awaits trial. Watch the videos under “Resources” below. Do you think Navy officials acted fairly? Explain your answer.

Watch a March 29, 2019 interview with Chief Gallagher’s wife and brother: