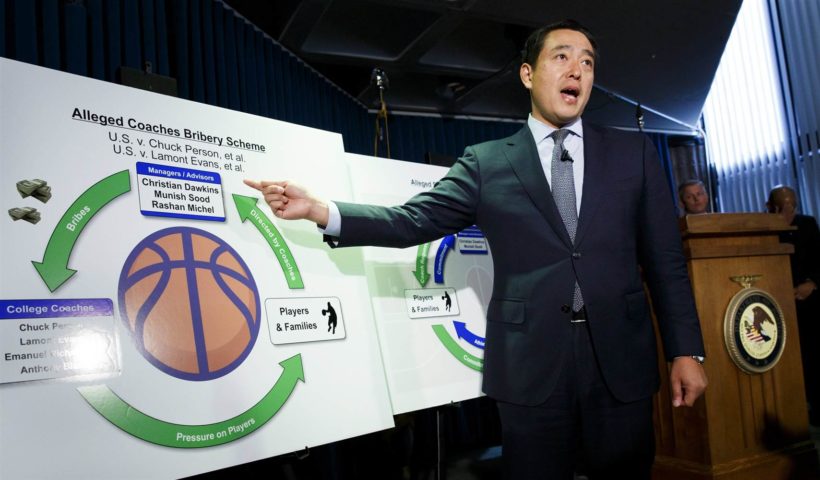 Joon Kim, US Attorney for the Southern District of NY, discusses arrests in NCAA bribery scheme

(by Nolan D. McCaskill, Politico) – Four NCAA Division I coaches have been arrested and charged in a major college basketball fraud and corruption scheme, the Justice Department announced Tuesday, days before college basketball season officially commences for coaches and players.

Joon Kim, acting U.S. attorney for the Southern District of New York, revealed an ongoing years-long probe that had been covert until it was announced Tuesday…

“Today, we announce charges for fraud and corruption in the world of college basketball,” Kim said.

The FBI and U.S. Attorney’s Office have been investigating since 2015 the criminal influence of money on coaches and NCAA student-athletes, a probe that began with a cooperative witness and included two undercover FBI agents and wiretaps. The FBI detailed its allegations in three separate complaints spanning more than 100 pages.

At a news conference announcing the charges Tuesday afternoon, Kim cast the coaches as corrupt individuals who sold out their players to enrich themselves. The documents allege that the coaches took bribes in exchange for influencing their players to sign with financial managers and advisers once they entered the NBA. …

Those charged include three people associated with professional managers and advisers [college players are not permitted to have agents] and three others with ties to Adidas, the global sportswear company. “For these men, bribing coaches was a business investment,” Kim said. “They knew that the corrupt coaches in return for bribes would pressure the players to use their services. And they also knew that if and when those young players turned pro, that would mean big bucks for them in professional fees and profits.”

Kim detailed what he called “two different but related schemes.” The first included coaches accepting bribes in exchange for directing players and their families toward those people, while the second hinged on managers, advisers and Adidas representatives funneling more than $100,000 to the families of some of the nation’s top high school basketball recruits in exchange for their commitment to a school sponsored by Adidas.

“While pushing these professionals, the bribed coaches showed little regard for the players’ well-being. They ignored red flags, seeing only the green of the cash bribes flowing their way,” Kim said.

Person has been charged with six counts of conspiracy, fraud and solicitation of bribes. The FBI alleges that Person, a former NBA player, “abused his coaching position … to solicit and obtain bribe payments from” the financial adviser, who was secretly working with the bureau [FBI], in exchange for pushing athletes toward retaining the adviser’s services when they entered the NBA.

The scheme began with bribe payments arranged by Rashan Michel, who had a preexisting relationship with Person and founded a clothing company based in Atlanta that specializes in custom-made suits, according to the FBI. Person allegedly encouraged athletes to buy suits from Michel’s company and sometimes set up the adviser to pay athletes’ families directly, violating NCAA rules. [Person allegedly told one player, “The most important part is that you … don’t say nothing to anybody … don’t share with your sisters, don’t share with any of the teammates, that’s very important ’cause this is a violation … of rules. But this is how the NBA players get it done. They get early relationships, and they form partnerships, they form trust, you get to know [financial advisor], you get to know Rashan a lot and like Rashan can get you suits and stuff … you’ll start looking like an NBA ball player, that’s what you are.”]

A separate complaint details Bland, Evans and Richardson’s counts of conspiracy and solicitation of bribes. Evans allegedly received at least $22,000 in bribe money in a scheme involving Christian Dawkins, a now-former Adidas employee … and Munish Sood, founder of an investment services company, where he serves as its chief investment officer. … In exchange for the money, the FBI said, Evans exerted influence over his players at South Carolina and then Oklahoma State, where he currently coaches, to retain the services of Sood and the aforementioned financial adviser.

Richardson allegedly received $20,000 in bribes either paid or facilitated by Dawkins and Sood. … In exchange for the money, the FBI said, Richardson pressured college players to retain Dawkins and Sood as their manager and financial adviser, respectively.

And Bland accepted at least $13,000 in bribes paid or facilitated by Dawkins and Sood and allowed the two to send an additional $9,000 to the families of two athletes, the FBI said. …..

The FBI quoted Dawkins boasting with others involved that they could “run college basketball” with their scheme. He was also recorded acknowledging that all payments couldn’t be fully accounted for on paper because some of it was “whatever you wanna call it, illegal.” …

[During one recorded conversation between Dawkins, Sood and the FBI’s informant, Dawkins stated that the easiest way to conduct such bribery schemes was through assistant coaches because head coaches “aren’t willing [to take bribes] cause they’re making too much money. And it’s too risky.” Plus, assistant coaches are better at getting “direct access” to the players, as opposed to head coaches.]

“Month after month, the defendants exploited the hoop dreams of student-athletes around the country, allegedly treating them as little more than opportunities to enrich themselves through bribery and fraud schemes,” Kim said. “Fraud, abuse and corruption of the type alleged in the charges brought today contaminates all that is good and pure around it, and it has no place in college sports.”

Kim charged that the defendants’ conduct “sullied the spirit of amateur athletics” and “showed contempt” for the thousands of players and coaches across the country who follow the rules and play the game the right way.

“And as many of them hit the hardwood floors later this week for college basketball’s first official day of practice, we hope that these charges and arrests will help keep the sport that they love clean and honest,” he added.

William Sweeney, assistant director-in-charge of the FBI’s New York Office, said the defendants all “contributed to a pay to play culture that has no business in college basketball” and insisted that the charges should serve as a warning to others, as the investigation is ongoing.

“To others choosing to conduct business this way in the world of college athletics,” he said, “we have your playbook.”

From Politico .com. Reprinted here for educational purposes only. May not be reproduced on other websites without permission from Politico.

3. What wrongdoing did prosecutors say they uncovered during their two year investigation?

5. a) How many people are facing federal criminal charges? List those mentioned in the article.
b) What charges were brought against Coach Person? How did the FBI describe his actions?

6. Re-read paragraphs 18-22. Do you agree with the remarks made by Mr. Kim and Mr. Sweeney? Explain your answer.

7. Watch the video under “Resources” below, which is a clip from acting U.S. Attorney Joon Kim’s press conference Tuesday.  After hearing quotes of the coachs’ remarks, what is your reaction?

The National Collegiate Athletic Association (NCAA) is a non-profit organization which regulates athletes of 1,281 institutions, conferences, and individuals:

Watch a clip from the press conference held by Joon Kim, acting U.S. attorney for the Southern District of New York :