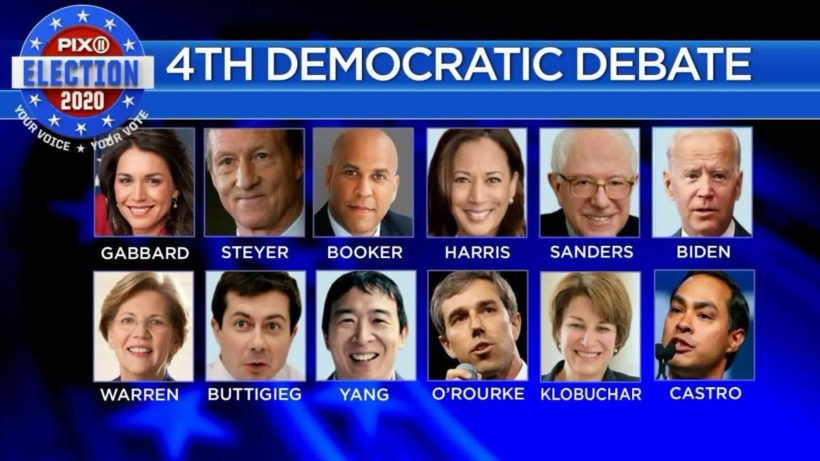 (by Nicholas Sakelaris, UPI) — The fourth Democratic primary debate [took place] in central Ohio [last night] and featured a dozen candidates on the stage, from a still expansive pool of hopefuls in which seven failed to qualify. …

Of the 19 Democratic candidates, 12 qualified for the debate, which required more stringent criteria.

The debate’s heightened requirements included at least 2 percent support in four early state or national polls and 130,000 unique donors. Both Steyer and Gabbard qualified this time, despite not making the cut in the third debate in Houston last month. …

Experts expect the pool to shrink further in the following primary debates. The party said last month even more stringent requirements must be met to qualify going forward — 3 percent support in the four early voting states or national polls and 165,000 unique donors.

So far, just five candidates have qualified for the Nov. 20 debate in Georgia — Biden, Warren, Sanders, Harris and Buttgieg. The venue and format have yet to be announced. …

What will they talk about?

The House’s impeachment inquiry involving President Donald Trump is expected to be a topic of discussion, and how it relates to Biden’s involvement over his son’s [controversial] professional dealings in Ukraine. Most Democratic candidates have voiced support for the impeachment inquiry.

Healthcare is also sure to be discussed, as several candidates have unveiled plans to reform or enhance the healthcare system. Biden has said he would effectively build on the Affordable Care Act, while Sanders and Warren support “Medicare For All” plans.

Questions about the economy, the trade conflict with China, tensions with Russia and Iran and gun violence are also expected to be posed to the candidates.

NOTE TO STUDENTS: The central focus of a debate should be to provide voters with information they need to measure the suitability of the candidates for office.

2. What requirements did the candidates need to meet to qualify for last night’s debate?

3. List the candidates who did not make it into this 4th Democratic debate.

4. a) When is the next Democratic primary debate?
b) How will the requirements needed to qualify for the next debate change?
c) Do you think having such requirements is too much, too little or just right? Explain your answer.

CHALLENGE: Take time to learn about where the candidates stand on the issues, what their positions are, and what their proposals are for carrying out their plans. Most of the Democratic candidates are current or former office holders so they have a track record of what they have done to advance their agendas. Consider the following: What do they say, what have they done, what do others say about them? For what reasons do voters support them? Discuss the issues with a parent as well.