(by Tamar Lush, WashingtonTimes.com) AP, PORT-AU-PRINCE, Haiti – From the dusty rock mounds lining the streets to [the] National Palace … rubble is one of the most visible reminders of Haiti’s devastating earthquake. 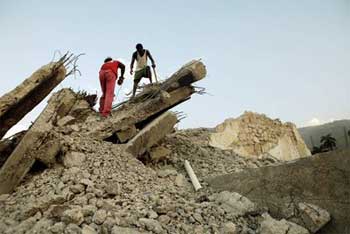 Rubble is everywhere in this capital city: cracked slabs, busted-up cinder blocks, half-destroyed buildings that still spill bricks and pulverized concrete onto the sidewalks. Some places look as though they have been flipped upside down, or are sinking to the ground, or listing precariously to one side.

By some estimates, the quake left about 33 million cubic yards of debris in Port-au-Prince – more than seven times the amount of concrete used to build the Hoover Dam. So far, only about 2 percent has been cleared, which means the city looks pretty much as it did a month after the Jan. 12 quake.

Government officials and outside aid groups say rubble removal is the priority before Haiti can rebuild. But the reasons why so little has been cleared are complex. And frustrating.

Heavy equipment has to be shipped in by sea. Dump trucks have difficulty navigating narrow and mountainous dirt roads. An abysmal records system makes it hard for the government to determine who owns a dilapidated property. And there are few sites on which to dump the rubble, which often contains human remains.

Also, no single person in the Haitian government has been declared in charge of the rubble, prompting foreign nongovernmental organizations to take on the task themselves. The groups often are forced to fight for a small pool of available money and contracts – which in turn means the work is done piecemeal, with little coordination.

Projects funded by the U.S. Agency for International Development (USAID) and the Defense Department have spent more than $98.5 million to remove 1.2 million cubic yards of rubble.

“There’s not a master plan,” Eric Overvest, country director for the U.N. Development Program, said with a sigh. “After the earthquake, the first priority was clearing the roads. That was the easiest part.”

Mr. Overvest said the Interim Haiti Recovery Commission – created after the earthquake to coordinate billions of dollars in aid – has approved a $17 million plan to clear rubble from six neighborhoods in Port-au-Prince. The neighborhoods have not yet been selected, however, and it’s unclear when debris will be removed from other areas.

“Everybody is passing the blame on why things haven’t happened yet,” he said. “There should be one person in charge. Resettlement has not even begun yet, and it can’t until the city has been cleared.”

Mr. Voltaire maintains that there are enough crushers, dump trucks and other heavy equipment for the job; others say that more machinery is needed. But everyone agrees that recovery will take decades – and the slower the rubble removal, the longer the recovery.

Most Haitians are simply living with the rubble, working and walking around it. After a while, the gray heaps and cockeyed buildings just blend into the tattered background of the city.

“It will take many, many years to fix,” Mr. Overvest acknowledged. “We can’t just go with wheelbarrows to remove it.”

But that’s exactly what some Haitians are doing: using shovels and wheelbarrows to clear properties – a Sisyphean task if there ever was one.

“Personally, I don’t think Port-au-Prince will ever be cleared,” said 47-year-old Yvon Clerisier, an artist working a temporary job clearing rubble with a rusty shovel for a private homeowner. He wore torn jeans, a sweaty T-shirt and sandals, and was covered in a fine dust.

Mr. Clerisier was one of a dozen men working …[for] property owner Gregory Antoine, [who] said he paid the crew $1,200 for three weeks of work.

“People want to work,” Mr. Antoine said. “If you get a good organization to put people to work and give them direction, things will get done. But right now, nothing is getting done.”

It’s not for lack of trying. The nonprofit group CHF International spent about $5 million of USAID money on heavy machinery and paying Haitians to remove rubble from specific sites.

Dan Strode was the rubble-removal operations manager for CHF for three months; some dubbed him “the rubble guy” because of his enthusiasm for the job.

“Rubble isn’t sexy,” the Californian said. “And clearing it is not as simple as people think.”

Mr. Strode’s big worry is that debris won’t be cleared fast enough and that the piles of rocks and garbage and dirt will be overtaken by tropical growth.

“If we don’t clear it, what we will leave behind is something that is worse than before,” he said. “If you come back in a year, and the rubble hasn’t been cleared, it will be grown over, subject to landslides and unstable.”

Mr. Strode, who coordinated the removal of nearly 290,000 cubic yards of material in three months, said a major obstacle to demolishing buildings has been the lack of property records, which either were destroyed in the quake or never existed at all.

Without an owner’s consent, it is difficult to remove debris, he said. Another problem: Strode often received approval to demolish a building such as a hospital or a school – even when nearby homes were at risk.

“You cannot wantonly go in and demolish,” he said. “There’s a liability issue.”

Mr. Strode is no longer doing rubble removal. The grant money ran out, and it has not yet been renewed.

Another hurdle is dumping the debris.

While many private landowners and others are dumping the rubble in the streets, canals or countryside, there’s only one place in all of Haiti where nongovernmental organizations using U.S. money can take contaminated rubble: an approved and environmentally surveyed site.

“Not all rubble is the same,” said Michael Zamba, the spokesman for the Pan American Development Foundation. “There’s a lot of contaminated rubble with human remains in it. It can’t go in a standard landfill.”

Mr. Zamba points out that before the earthquake, Haiti was the least-developed country in the Western Hemisphere – so it’s not that surprising recovery is slow.

“Haiti is a really expensive place to work: You have to ship in gas, vehicles, people,” he said. “But you clean up the rubble in a neighborhood, and it transforms it. Life comes back.”

2. List the reason for the slow removal of the rubble.

3. How much has the U.S. spent so far to remove over 1 million cubic yards of rubble through our USAID and Defense Department?

5. a) Who is Leslie Voltaire?
b) Mr. Voltaire says there is enough heavy equipment for rubble removal and that what is needed is to appoint one person to be in charge of recovery.
Do you agree? Explain your answer.

6. Property owner Gregory Antoine, [who] said he paid a crew of 12 men $1,200 for three weeks of work also said “People want to work. If you get a good organization to put people to work and give them direction, things will get done. But right now, nothing is getting done.” What do you think of Mr. Antoine’s assertion?

The Pentagon appointed three-star general, Lt. Gen. P.K. Keen, the deputy director of the military’s Southern Command, to head the U.S. military relief effort in Haiti.  Visit the Southern Command website for updated information on the rescue and relief work of the U.S. at southcom.mil/appssc/index.php.

Read about the UN Stabilization Mission in Haiti at the website un.org/en/peacekeeping/missions/minustah/index.shtml.

Read about Help for Haiti at samaritanspurse.org/index.php/help_for_haiti.